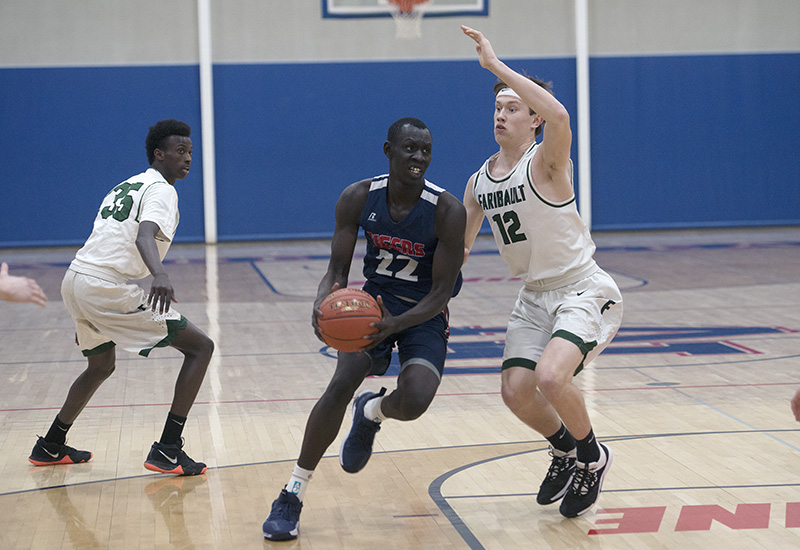 Albert Lea senior Chay Guen drives to the basket for an easy lay-in Tuesday night at home. Guen dominated with 41 points in the Tigers 77-61 win over the Falcons. - Tyler Julson/Albert Lea Tribune

The Albert Lea boys’ basketball team hosted a section playoff game for the first time since 2005 Tuesday night when Faribault came to town.

Behind a dominant performance from senior Chay Guen, the Tigers sailed to a win over the Falcons 77-61.

The Falcons got a quick three to start the game; however, the Tigers went on a 12-0 run and never let the Falcons take the lead again.

The first run came from Guen and fellow senior Connor Veldman, each totaling six points in the opening minutes.

Faribault was forced to call a timeout with just under 13 minutes remaining in the period. The timeout worked for a moment to slow Albert Lea’s momentum. However, Guen took control of the game scoring the next 15 straight points for the Tigers. 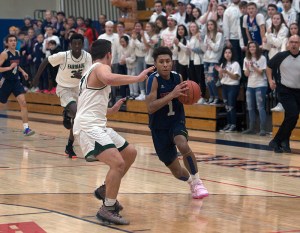 The Falcons’ physical attack on defense backfired, sending the Tigers to the bonus with over eight minutes left in the half. The Tigers capitalized by scoring six points from the line after that point in the half.

Heading into halftime, the Tigers held onto a 38-34 lead. Guen led all scorers at the break with 26 points. Veldman had six, while senior JJ Mucha-Owens and junior Bhan Kuey each had three.

The Tigers offense came out in the second half continuing its dominant performance.

The Falcons defensive plan to stand their ground in front of Guen on his way to basket failed to stifle the scoring as the Tigers went on to score 39 more points in the second half, including 15 more from Guen.

The Tigers extended their lead to as many as 20 points late in the second half. The closest the Falcons got was a six-point deficit with around nine minutes left in the game.

Guen led the game with a career-high 41 points. Mucha-Owens was also in double figures with 10 points.

Veldmand and Kuey each had nine. Senior Andrew Willner exploded in the second half with seven points and senior Koby Hendrickson had one.

The Tigers won their third game over the Falcons this season and their first section playoff game since the 2011-12 season when they beat Kasson-Mantorville in the first round.

They advance to the Section 1AAA semifinals where they will host Simley. The game is scheduled to start at 7 p.m. Saturday.

Albert Lea and Simley have not met this season. The Spartans are 14-13 this season and 0-3 in section play with losses to Kasson-Mantorville, Byron and Faribault.