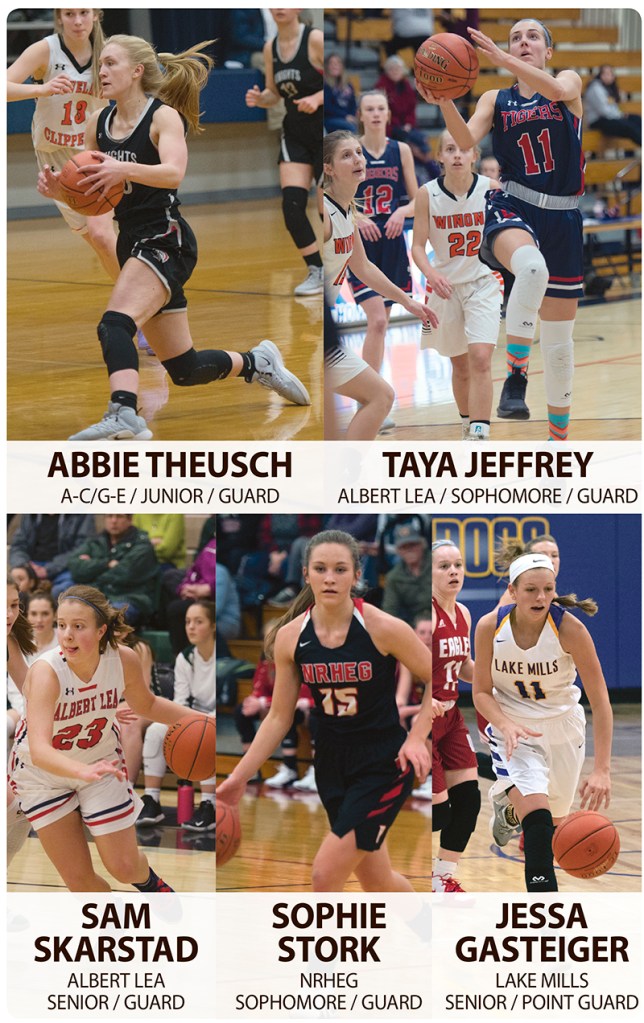 Abbie Theusch dominated on the floor for the Knights in 2019-20. Averaging nearly a double-double with 23.4 points per game and 9.9 rebounds per game, she was a force to be reckoned with. She led the Knights with 515 points, 220 rebounds, 99 assists and 101 steals. She also led all players in the area in points, rebounds and steals.

The Knights went 8-14 this season and with Theusch returning to the lineup next season, they will have a building block for improvement.

“She led us in every statistical category and was the player that created many things for us on both ends of the floor this year,” said head coach Jenny Hovendick. “She is a special athlete.”

Taya Jeffrey finished second in the area with 480 total points, which also marked the third-best single season in Albert Lea girls’ basketball history. She was also named a captain this season and to the honorable mention team in the Big Nine Conference.

On top of her 480 points, Jeffrey totaled 143 rebounds, 84 assists and 42 steals. She also recorded a 31-point game against Faribault, which was the eighth-highest single-game point total in Albert Lea girls’ basketball history.

“Taya had a phenomenal season,” said head coach Jason Thompson. “There were many times that she put the team on her back and carried us. She not only gets it done offensively, but always drew the assignment of guarding the opponent’s top player. If she continues her improvement and stays healthy, she will re-write the Albert Lea girls’ basketball record books.”

Sam Skarstad capped off a fantastic career by scoring 429 points in her senior season, marking the fifth-highest single-season mark for Albert Lea. Her career total came to 1,155 points, which is the fifth-highest total in program history. She was named to the Big Nine All-Conference team and was a captain for the Tigers this year.

Skarstad also pulled in 174 rebounds, dished out 56 assists and notched 51 steals. The Tigers went 10-18 this season, marking their best finish since the 2013-14 season. Skarstad was undoubtedly a huge part of the success.

“Sam had a great season, capping her stellar career,” Thompson said. “She surpassed the 1,000-point milestone, along with hitting a buzzerbeater vs. Northfield. It will be a tough task to replace her productivity next season.”

One of two sophomores named to the All-Area first team, Sophie Stork was a leader on the Panthers squad that did not have many upperclassmen. Stork was third in the area in scoring with 465 points. She also totaled 207 rebounds, 46 assists, 40 steals and 15 blocks, and recorded her 1,000th career point with two more years to play.

She will surely be heavily leaned on in the coming years for the Panthers, who finished this season with a 13-13 record.

Jessa Gateiger caps off a stellar career with 350 points in her senior season. She led the Bulldogs in scoring by more than 100 points more than the second-place scorer. On top of her 350 points, Gasteiger recorded 92 rebounds and 76 steals. She shot 38.5% from beyond the three-point line and was 79.1% from the free-throw line.

The Bulldogs went 9-14 this season with one win in the postseason.

“Most games, she never came off the floor,” said head coach Garrett Patterson. “She ran our offense and was one of the only true scorers on our team. She shattered the school records for made threes in a season this year, making 62; the previous was 50.”

Sidney Schultz totaled 406 points, 111 rebounds, 110 assists and 44 steals in only her freshman season.

Taylor Ingledue recorded 223 points, 140 rebounds and 38 blocks for the Bulldogs this season.

Megan Groe had 182 points, 81 rebounds and 48 steals for the Bulldogs.

Sara Allison was a strong asset for the Knights, contributing 172 points, 103 rebounds and 22 assists this season.

Jordan Juveland was a big part of the Tigers’ success with 140 points, 112 rebounds, 28 assists and 28 steals.