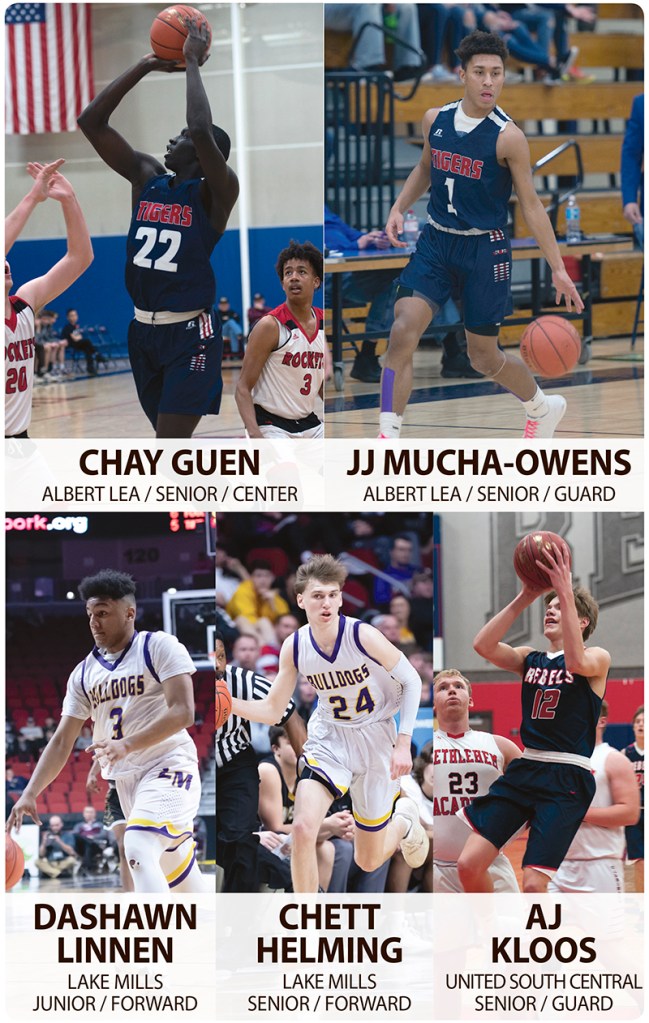 Chay Guen was a beast on the court for the Tigers in their turn-around season this year. His 501 points landed him in third place in scoring for the area this season, just one point behind the second-place finisher. Guen also led the Tigers with 224 rebounds, 52 steals and 46 blocked shots.

He was named to the Big Nine All-Conference first team and recorded a huge 41-point game against Faribault. The senior was one of the many reasons the Tigers went from 3-23 last season to 13-13 this season.

“Chay was a force when he wanted to be,” said assistant coach Stu Hendrickson. “He was our most dynamic player. He had the ability to energize his teammates and the crowd with a thunderous dunk, or a powerful block.”

The second Tiger to make the first team, JJ Mucha-Owens scored 380 points through his senior season. He also recorded 114 rebounds, 78 assists and 36 steals. Form the floor, Mucha-Owens shot 54.5% from two-point range and 30.9% from three-point territory. His 83.3% from the free-throw line earned him a second-best finish in the area. Mucha-Owens was selected as a Big Nine honorable mention player by the conference coaches.

“JJ was a three-year starter for the Tigers,” Hendrickson said. “He led the Tigers in three-point field goals (38) and free-throw percentage by shooting an amazing 83.3% for the season. He was instrumental in helping to close out many of our close wins at the free-throw line.”

Dashawn Linnen earned the Top of Iowa West Conference Player of the Year Award for his play this season. As a unanimous first team conference selection, Linnen was second in the area with 502 points and with a 59.3% shooting percentage. Linnen also recorded 108 rebounds, 45 assists, 41 steals and six blocks in the Bulldogs’ 23-3 season, in which they earned their first state title birth since 1986.

“Dashawn led our team in scoring and made a huge jump from his sophomore season,” said head coach Kyle Menke. “He attacks the basket well and has become a good three-point shooter.”

Chett Helming was a leader for the Bulldogs all season, finishing with 499 points, 153 rebounds, 41 assists and 40 steals. Helming was a third-team all-state selection by the Iowa Print Sports Writers Association and a unanimous selection to the Top of Iowa West All-Conference team. He finishes his career at Lake Mills as the seventh player to reach the 1,000-point mark and had a career=high 39 points in the substate game against Turkey Valley.

“Chett had an outstanding season and career at Lake Mills,” Menke said. “His performance in the substate game was probably the best individual game in program history.”

AJ Kloos led the area in scoring and rebounding by wide margins. He scored 585 points through the season, 83 more than second. He also pulled in 47 more rebounds than the second-place finisher, totaling 350. He added 93 assists to his season statline.

“Dedicating himself to early morning jump rope sessions and the weight room increased his explosiveness and he was the top player to guard in the conference,” said head coach Taylor Ovrebo. “Every game in every different situation he was double teamed. AJ played every position from point guard to the center and was the best back to the basket post in the conference.”

Koby Hendrickson led the area in two-point field goal percentage with 57.3%, was second in assists with 113 and third in rebounds and steals with 186 and 43, respectively. He also recorded 200 points and nine blocks.

Dawson Dahlum had a stellar season for the Wolverines scoring 492 points, while also recording 105 rebounds and 101 assists.

Lonnie Wilson scored 368 points, pulled in 158 rebounds and dished 67 assists for the Panthers this season.

Riley Staloch was second in the area in both rebounds and blocks with 303. He added 310 points throughout the season as well as an area-leading 46% from three-point range