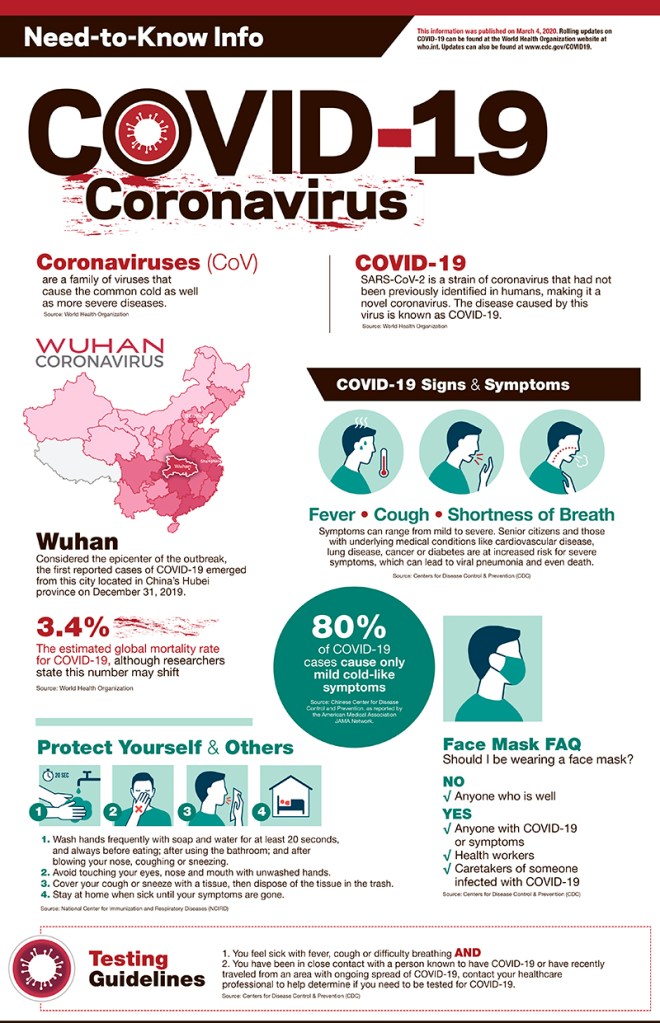 MINNEAPOLIS — The University of Minnesota announced Wednesday it is suspending in-person instruction at its five campuses through at least April 1 in response to the new coronavirus as Minnesota health officials confirmed the state’s fourth and fifth cases of CONVID-19.

Department of Health officials said one of the new cases was in Olmsted County, the other in Ramsey. Previous cases were in Ramsey, Anoka and Carver counties.

One of the biggest blows to Minnesota’s sporting calendar came Wednesday when the NCAA announced its upcoming championships would be staged without spectators, allowing in only people deemed essential staff and limited family members of the competitors. That includes the Division I wrestling meet next weekend at U.S. Bank Stadium in downtown Minneapolis, where the all-time attendance record for the sport (42,287) could have been broken with the event’s first foray into a football stadium. Usually, it’s held at basketball or hockey arenas.

For most people, the new coronavirus causes only mild or moderate symptoms, such as fever and cough. For some, especially older adults and people with existing health problems, it can cause more severe illness, including pneumonia. The vast majority of people recover from the new virus.

The patient in Olmsted County is in their 50s, started showing symptoms last Thursday and sought care and was tested on Monday, Infectious Disease Division Director Kris Ehresmann said. The patient showed symptoms at work, so health officials are working with the patient’s workplace, Ehresmann said.

The person recently had traveled to a place with other cases of COVID-19 and apparently had only limited contact with other people, Minnesota Public Radio News reported.

“Since we know or are confident where this case was exposed, we see no evidence at this time of transmission locally,” Olmsted County Public Health Director Graham Briggs told reported.

The recent case in Ramsey also was travel related, Ehresmann said. That person, apparently in their 30s, showed symptoms on Friday, sought care and was tested on Tuesday. That person only had contact with people in their home, which “is definitely a best case scenario,” Ehresmann said. In both cases, the patients are recovering at home.

At the University of Minnesota, school officials are extending spring breaks on the Duluth, Rochester and Twin Cities campuses through March 18; Crookston and Morris are slated to be off through March 20. After that, the university said all students on all campuses would be taught virtually. The university said it would announce later whether that period will be extended. The school said students are encouraged to stay at home, but residence halls, dining services and other services would stay open.

The University of Minnesota’s announcement mirrored that of several other universities nationwide following increasing concerns about the spread of COVID-19, the disease caused by the new coronavirus. University of Wisconsin-Madison officials announced Wednesday that they will suspend face-to-face instruction following spring break and that students shouldn’t return to the campus.

University of Minnesota President Joan Gabel said while there are no known cases of COVID-19 in the university system, the move is a precaution aimed at mitigating risk of exposure in the system, which has nearly 63,000 students on its five campuses.

“Maybe some students don’t have internet access, but I think it’s a good idea, especially for people living with children or older people,” Chieh said.

But Logan Magana, a 19-year-old freshman from Los Angeles, told the newspaper she is apprehensive about remote classes. “For me, it’s going to be harder to do better in class because I get distracted online,” Magana said.

Gov. Tim Walz on Tuesday signed a swiftly passed $21 million bill to bolster the state’s ability to manage the global coronavirus outbreak. House Democratic leaders introduced a package of bills Wednesday that includes expanding unemployment insurance and sick leave benefits during an outbreak of a communicable disease, compensating hourly school workers for days canceled due to COVID-19 and requiring health plans to cover testing, treatment and quarantine without cost-sharing.