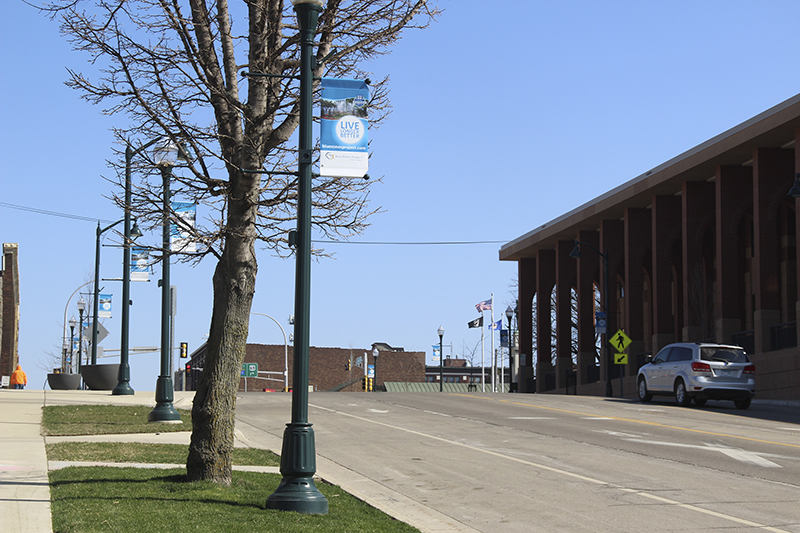 A new effort is underway to recognize graduating seniors on banners that will be placed on Broadway Avenue. Sarah Stultz/Albert Lea Tribune

With the rest of the 2019-20 school year in limbo, many area individuals and businesses have come together with ideas to show their support for the graduating seniors.

Most recently, the idea to showcase this year’s seniors with banners featuring their names and faces was brought forth by local couple, George and Jill Marin.

George Marin, pastor of Grace Christian Church, said he saw the idea on the internet and posed the idea about starting the project in Albert Lea on his Facebook page. After an overwhelming positive response, he decided to move forward with the idea.

“In times of crisis, people tend to look for symbols of hope,” George Marin said. “We feel like this is a real opportunity to express leadership in our community, express community spirit and give a symbol of hope. As the seniors drive that Broadway corridor, they’re going to know that we as a community love them, we support them and we celebrate them.”

The first things the Marins did to get the ball rolling was talk to Albert Lea City Council members and administrators to see what they needed to do, and find a local printer that could get the banners made.

George Marin recently submitted a letter to the City Council, which will appear in front of the board Monday. The Marins enlisted the help of Tic Toc Digital Printing Plus, and George Marin said they have been a great company to work with so far.

“We want it to be a grassroots, inclusive, community project,” George Marin said. “We’re working with Tic Tic Digital Printing and they have been fantastic to work with. We feel like it’s a win-win situation because it’s turning business right here in our local economy.”

Due to some constraints, they were unable to obtain senior photos from the school and instead, they are asking seniors to send in a fun and casual selfie-style photo in portrait format to al2020gradbanners@gmail.com. Along with the photo, seniors are asked to send their full name, their preferred first name and initial, along with the statement, “I own the rights to this image and give permission for its use in the 2020 AL Grad Banner Project.”

Jill Marin said the banners could possibly be ready by as early as May 22, the original graduation date.

Tic Toc Digital Printing said it would charge $5 per banner to put them up and take them down from the poles on Broadway. George Marin said he plans to ask the city to help with the cost of installing them and removing them. He also plans to ask for donations from individuals and businesses in the community.

There are 66 poles on the Broadway corridor and each pole can hold four banners, allowing for 264 seniors to be recognized.

Each banner will cost $32.50 to be paid by the senior or their family and the senior will get the banner back as a keepsake when they are taken down from the poles. However, George Marin said he recognizes that this is a tough time financially for many families and if a family can’t afford a banner, they are going to make sure they get one.

Jill Marin said they are working to set up a donation spot in Albert Lea where anyone can come in and make a general donation to the project either for the banners themselves or the installation costs. She said to look to the “George Marin for Albert Lea” Facebook page for an announcement when the donation spot is ready.

“We know a lot of families are hurting because it is an entire family experience to celebrate those awards, those playoffs, those sporting events, all of those final things,” Jill Marin said. “This is just a little extra special touch that we can maybe show our support to these families and these graduates.”