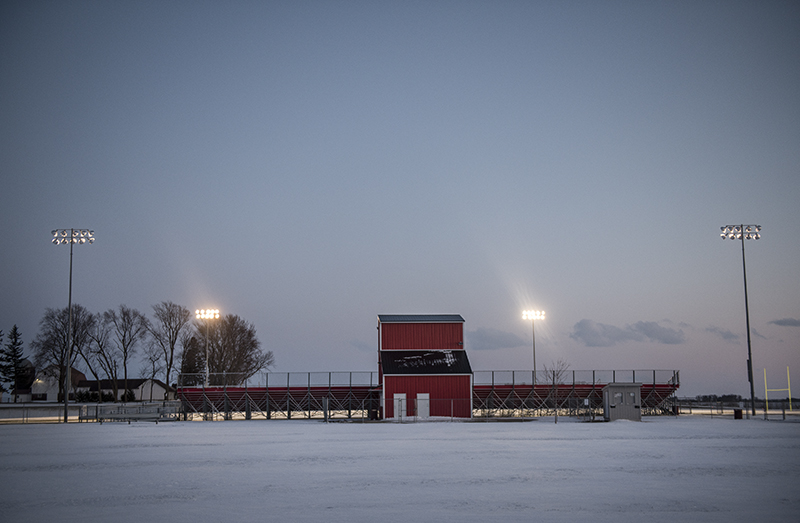 The lights at NRHEG's football stadium come on Monday night in honor of the school's seniors, who are doing their classwork and learning at home amid the COVID-19 pandemic. - Colleen Harrison/Albert Lea Tribune

Usually opponents on the fields, many area schools as well as high schools from all across the state are joining forces in the #BeTheLightMN campaign.

The #BeTheLight movement is an effort to unite schools all across their respective states by lighting up their sporting complexes once a week during certain hours of the night to show support for their seniors, letting them know that the district stands with them.

The movement originated in Texas and has since moved into a number of states including, most recently, Minnesota. The entire Gopher Conference, which includes NRHEG and United South Central, lit up their fields for the second week Monday night from 8 to 9 p.m.

“I found out about the movement through John Millea’s tweets,” said NRHEG Activities Director Dan Stork. “We, as Gopher Conference AD’s, then agreed that we would do it Monday nights at 8. The biggest thing I want to do is give the kids and communities some hope. I wanted them to know that we are thinking of them and miss them and that together we can overcome this.”

After seeing all the schools that were participating, Albert Lea High School decided to get in on the action and will light up Hammer Field Thursday night from dusk until midnight in recognition of its seniors.

“There’s been quite a lot of momentum behind the “#BethelightMN” on Twitter and social media,” said Albert Lea Activities Director Paul Durbahn. “We saw other communities in the state symbolically come together in this way and thought this is a nice touch.”

Albert Lea is also encouraging households to light up their porch lights in a show of support as well.

While community participation is encouraged, all schools and the Minnesota State High School League are adamant that people do not gather and participate from home. Both Durbahn and Stork said they want to make it clear that no one should be gathering to see the lights. Stork added that people should look to social media for pictures.

More than 250 Minnesota high schools have joined the cause, and Stork said the support from the community has been strong. According to Stork, several students and community members have reached out to say thank you, and one student said she was in tears after seeing the photos on Twitter.

On top of their involvement in the #BeTheLight movement, Durbahn said the school district is working on more ways to highlight its seniors.

“District 241 is working on additional ways to recognize our students, including posting senior bios on the scrolling sign off of Bridge (Avenue) and some sport-specific recognition pieces,” Durbahn said. “The district is still hoping for a graduation ceremony. We can’t do enough to recognize this group of seniors, as their traditional milestones are likely to look a lot different.”