In Minnesota, enforcement of pollution laws goes on — with only a few exceptions 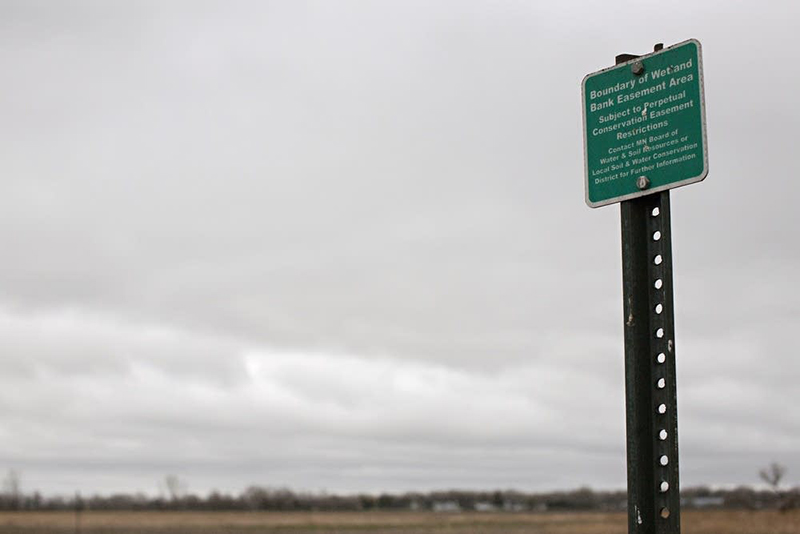 A sign marks the boundary of a wetland bank easement area near Downer in 2016. The Minnesota Pollution Control Agency is granting leeway in meeting some of its water and air quality protection requirements during the coronavirus pandemic, prompting some environmental groups to call for more transparency. - Ann Arbor Miller/MPR News

With Minnesota under a stay-at-home order to prevent the spread of the coronavirus — and many employees working remotely — enforcing environmental regulations has gotten more challenging.

The Minnesota Pollution Control Agency said it’s still requiring industries, farms and other entities with air, water or waste permits to follow state environmental regulations. But it’s also granting leeway to organizations in meeting some of those requirements, sparking a call from some environmental groups for more transparency.

Last month, the MPCA announced it would consider requests for “regulatory flexibility” for businesses, local governments or others that are finding it difficult to comply with state air and water quality regulations because of staffing shortages or other issues directly related to the pandemic.

“We are thinking about ways that we can provide flexibility that don’t end up causing environmental or human health risks,” said Katrina Kessler, assistant MPCA commissioner for water policy and agriculture. “But also, provide some flexibility in this time when we’re all operating in kind of a high-anxiety situation.”

Kessler said all of the requests the MPCA has received so far have been related to administrative requirements, such as asking to delay submitting a report, rather than requests to exceed pollution limits.

Environmental groups said they believe the MPCA’s approach to grant some flexibility is a reasonable response to the pandemic. But they raised concerns about a lack of information available to the public.

“We would like to see more transparency about which facilities are making requests, and what they’re asking for and why,” said Kathryn Hoffman, CEO of the Minnesota Center for Environmental Advocacy. That transparency, she said, “would create a check on any potential for abuse.”

As of last week, the MPCA had received 227 regulatory flexibility requests, which it’s evaluating on a case-by-case basis. So far, the agency has approved 188 of the requests and rejected three. The rest are being reviewed.

The MPCA has posted a dashboard on its website with general information about the requests, which mostly come from state universities, counties and private businesses. Many are asking for more time to do hazardous waste inspections or to submit an annual report.

In some of the state’s smaller counties, only one or two people might be responsible for complying with environmental regulations, said Brian Martinson, environment and natural resources policy analyst for the Association of Minnesota Counties.

“It’s been a bigger challenge for them,” Martinson said.

But the MPCA dashboard doesn’t show specifically which requests were approved, and that’s troubling to some environmental advocates. They want more details about the requests to be available to the public.

“What it doesn’t tell you is if you’re a neighbor to one of these facilities,” said Steve Morse, executive director of the Minnesota Environmental Partnership. “It doesn’t tell you exactly who submitted it, and it doesn’t allow people who might be directly impacted — even those living right nearby — the opportunity to even know that was granted, or to do any comment on the front end.”

Kessler said her agency wants to be transparent, but added that there are some confidentiality concerns in posting more information about the requests, especially when it comes to requests from individual farmers.

Some advocates say those details are important — especially because there appears to be a potential link between the more severe effects of the coronavirus and air quality. A recent study from Harvard University found that people with COVID-19 who live in places in the U.S. with high levels of air pollution are more likely to die from the disease.

“We don’t think this is a time to increase public health risks and exposure to toxic pollution,” said Margaret Levin, state director of the Sierra Club’s North Star chapter. “In fact, this is a time when we need to be even more protective of our communities that are most vulnerable in this crisis.”

Kessler said the MPCA is taking into account in its decisions environmental justice issues, and whether a request for leniency would affect a community that has been disproportionately impacted by pollution in the past.

On a federal level, the U.S. Environmental Protection Agency recently announced a sweeping decision to temporarily suspend enforcement of environmental laws during the pandemic.

That announcement likely won’t have a significant impact in Minnesota, where authority to enforce most environmental regulations has been delegated to the state pollution control agency.

Kessler said the agency has postponed some routine inspections and focused on those critical to public health and safety. And while most of the MPCA’s 900 employees are working remotely, some inspections may be done remotely via video technology, she said.

What hasn’t been put on hold — at least not yet — is the review process for some major projects, such as Enbridge Energy’s Line 3 oil pipeline replacement. That’s of concern to some environmental advocates.

The public comment period for Line 3’s water quality certification, one of several permits Enbridge needs before it can begin construction on the pipeline, closed last Friday. Public hearings had to be canceled, so instead the MPCA held town halls via telephone.

Environmentalists say the approval of high-profile projects should be postponed, because many people are too distracted by coronavirus concerns to pay attention, or may not have adequate Internet connections to participate in virtual meetings.

The Sierra Club’s Margaret Levin said it’s not clear if everyone who wanted to participate in the Line 3 town halls was able to.

Kessler said much of the MPCA’s work revolves around renewing existing permits. The agency wants to make sure it’s supporting the economy and allowing work that’s critical to health and safety to continue, such as a city upgrading its sewer treatment plant.

But she said the agency is also weighing how to move ahead with approving new or expanded projects such as Line 3, including whether the time period for public comment is long enough and whether there are adequate opportunities for people to weigh in.

“We want to be really careful about when we move forward with projects, that we can do it in a transparent way that still allows for public engagement,” she said.