Linda Louise Patschke, 83, of Kasson, formerly of New Richland, passed away peacefully Saturday, March 28, 2020. A memorial service will be at a later date.  Bonnerup Funeral Service is assisting the family. 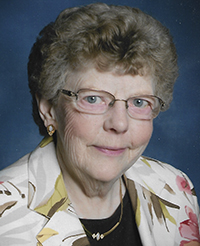 Linda was born Oct. 30, 1936 to Carl and Clara (Thofson) Knudson, the seventh of eight children. She grew up on the family farm near Hartland. She was a graduate of New Richland High School with the class of 1954. She attended a year of college at the University of Minnesota in Minneapolis.

Linda was united in marriage to Carl Milo Patschke on Feb. 24, 1958, in Nashua, Iowa, at The Little Brown Church. They made their home in Hartland, where they raised their two sons, Russ and Steve.

Linda loved spending time with her family and friends. She always had great story to tell. She was an avid reader, and enjoyed shopping and decorating her house for every season and holiday.

She was preceded in death by her parents; her husband, Carl; brothers and sister Kernel, Alert, Curt and Ellie; brothers-in-law Charles, Corry and Harold; and sisters-in-law Lillian, Arlene, Betty and Nora.