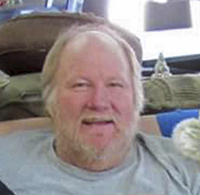 He was preceded in death by his father, James Hanson; brother, Kevin Severson; and grandparents Orville (Nellie) Hanson and Lyle (Mildred) Hahn.

Rick was proud to be a United States Army veteran, serving his country honorably from 1980 to 1982.

To protect the health and safety of all, services are currently being limited as required by state and local authorities and the CDC. Memorial services will be held at a later date. Follow the “Rick Hanson Memorial” page on Facebook for details.