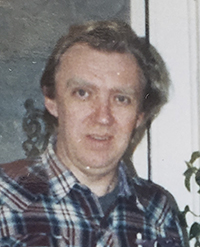 Ronnie was born June 19, 1947, to parents Ordean and Mabel (Ingvaldson) Jenson in Albert Lea. He was raised in Albert Lea and attended Albert Lea High School.

On Feb. 3, 1968, he married Carolyn Bergland at Grace Lutheran Church in Albert Lea. They had two children, Kellie and Breck. Ronnie worked as an auto body technician and had an affinity for fixing car bodies. He also worked at Shopko in the maintenance and custodial role.

Ronnie was a family man who enjoyed getting together playing cards, especially with his brother-in-law, Neal, and Clarice. He really enjoyed spending time with Dodge and Everett every chance he had; they always made him smile and laugh at the stuff they did and said. He was a big movie buff! He could recite the TV lineup for the week to anyone who asked. He was a jack of all trades; he could fix anything, and he especially liked fixing TVs, clocks and watches, and tractors. He really enjoyed seeing the old fixed up cars and trucks driving down the road; he would say here comes a ’57 Chevy or whatever it was. He knew the make and model from a mile away. He had many stories of the different cars and trucks he had over the years and he could tell you of every one of them and the story to go along with them. He and his wife went to rummage sales every chance they had! He enjoyed his animals, the horses, Trooper (the dog) and Bosco (the cat).

He is survived by Carolyn Jenson; daughter, Kellie (Dean) Anderson, of Hayward; son, Breck Jenson, of Walters; grandchildren Samantha (Brandon) Cech and their children Everett and Dodge of Hollandale, Mackenzie Jenson and family of Kansas, Alec Jenson (significant other, Brieonna) of Kansas; sister, Lonnie (Armando) Benett, of St. Paul; and niece, Hollie (Luke) Marcks, of Albert Lea and their family.

Ronnie was preceded in death by his parents Ordean and Mabel; mother and father-in-law Helmer and Margaret Bergland; great-grandson, William Cech; brother-in-law, Jerry Bergland; and aunts and uncles Doris and Bert Herth and Stella and Tom Kopsing.

Ronnie will truly be missed by his wife and children, grandchildren and great-grandchildren.