Susan Ann Varenhorst of Albert Lea died Friday, March 13, 2020, in her home. Due to the current  restrictions  on gatherings and travel, the family will postpone a memorial to take place in her home for her family.  Information will be updated at a later date. 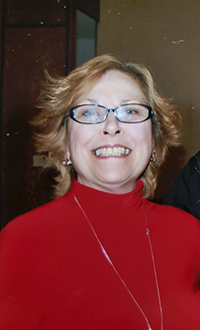 In the 1970s,  Sue  relocated to the Twin Cities area and worked at St. Paul Companies. Sue met and then married William G. Barnes. Sue and Bill had a son, Alexander Phillip Barnes. Sue became a stay-at-home mom after Alex was born. Bill and Sue spent the early- to mid-’80s in Detroit, and then returned to Minnesota. Sue was quite a decorator, always painting and repainting. She reupholstered furniture and collected dolls, antiques, dinnerware, vintage fabrics, jewelry and loved kimonos. She had a flare for combining beautiful pieces together, and loved color.

In her last years she returned to Albert Lea. She lived with her son, Ray, and his wife, Melissa. Sue suffered for many years from COPD.  She was homebound, but despite her  condition she lived as best she could. She loved her silk pajamas, murder mysteries, putting puzzles together with her son, Ray, and time with her family. Her family has heavy hearts as they say goodbye to their beautiful, eccentric, brave, bold and unique mom, grandmother and friend.