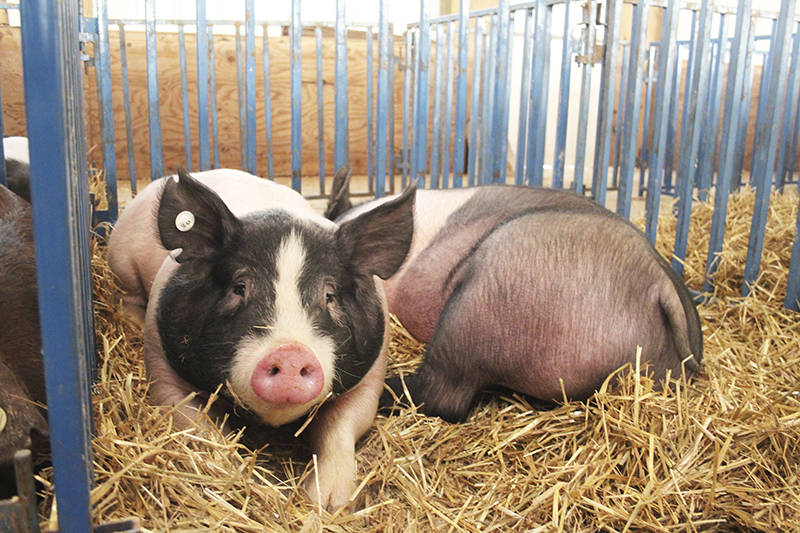 Some hog producers in the Midwest are facing difficult decisions after the COVID-19 pandemic has led to the closure of some major pork processing facilities in and around Minnesota. - Sarah Kocher/Albert Lea Tribune

Area hog farmers are beginning to feel the stress as some slaughterhouses in and around Minnesota have been temporarily shut down because of workers becoming sick with COVID-19.

However, the farmers said with Hormel in Austin still open, they have not had it as bad as other producers in different parts of the state or in other parts of the Midwest.

“We’ve been fortunate, but I know there’s people who aren’t,” said Gary Chicos, who oversees the finishing sites for a producer in Freeborn and Mower counties and has been in the industry for 35 years.

Chicos said 80% of the hogs he oversees are taken to Hormel to be processed, and two loads are taken to a Tyson plant. He said if Hormel was to start not taking as many pigs or if it shut down, then he and other producers would get heavier pigs and would be forced to make some difficult decisions.

He said different packing plants have different weight requirements for their hogs. For example, while Hormel wants pigs to be between 270 and 280 pounds and wants smaller cuts, Tyson wants its pigs over 300 pounds.

If the hogs get beyond the guidelines, producers get docked per animal.

Chico said if more pork producing sites are affected and are not taking more hogs, and the pigs get too big, producers will have to decide what to do with them. He noted some of the area meat markets would likely take a few, but a majority of the hogs would likely have to be euthanized.

“I’ve never seen anything like this,” said Brian Bergene, who has been a hog farmer for 39 years in Rose Creek east of Austin. “This is a total waste of a good product. You have a lot of time and money into these hogs. It’s hard to see.”

Bergene said he and his son each have 2,400 hogs at a time — all of which are processed at Hormel.

They sell a little over two groups of hogs each year — every 21 weeks. Once the hogs are sold, then they wash their barns and prepare for the next round of pigs.

“You just can’t stop the cycle,” he said. “These pigs are coming.”

Bergene said so far Hormel hasn’t backed up his loads yet, though he has heard of others who are getting loads shut down.

He noted pigs gain at least a couple pounds a day, especially when they get toward market weight, and in a week’s time they can grow to be too large for guidelines requested by processing plants.

Petersen said Minnesota’s meat processing capacity has taken a big hit as slaughterhouses temporarily shut down and said it may take some time before both the Smithfield pork plant in Sioux Falls, South Dakota, and the JBS pork plant in Worthington reopen.

“This continues to be a very difficult situation for our farmers with these plants being down,” Petersen said during Monday’s daily briefing on Minnesota’s response to the pandemic. He said the state is working on increasing capacity at small meat plants around Minnesota.

“The decision to euthanize animals is not done easily, and it’s very emotional,” Petersen said.

While some farmers are euthanizing livestock because of reduced demand, Petersen said Minnesota’s food supply is stable, thanks to a good amount of product in stores and in storage. But he said there will be occasional disruptions to the supply chain.

“Our goal is to get the plants running and keep them running,” Petersen said.