Albert Lea police have issued an arrest warrant for a man in connection to a shooting that injured another man last week on Gene Avenue in Albert Lea. 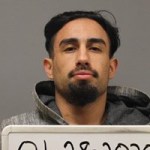 The warrant is for 26-year-old Omar Rodriguez, according to a press release. Any information about the whereabouts of Rodriguez can be reported to the Albert Lea Police Department at 377-5200.

The shooting, which took place May 9 on the 1200 block of Gene Avenue, injured a 21-year-old Albert Lea man.

Police stated the man was shot multiple times and was taken by Mayo Ambulance to Mayo Clinic Health System in Albert Lea before being taken to St. Marys Hospital in Rochester.

Suspects reportedly fled in a vehicle prior to officers arriving on scene and were believed to be known to the victim.