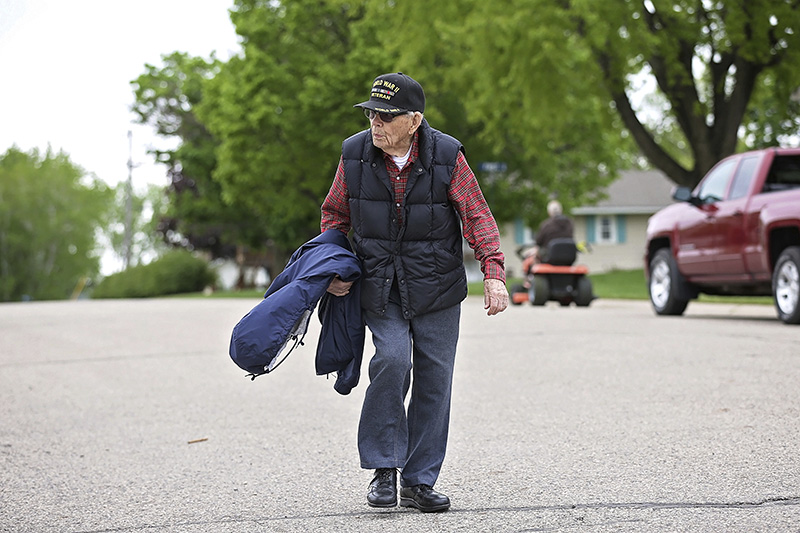 Ninety-nine-year-old Mickey Nelson, of Clarks Grove, has pledged to walk 100 miles in an effort to raise money for the Salvation Army Northern Division. He plans to have all 100 miles completed by the end of summer. - Photo Courtesy of Craig Dirkes

CLARKS GROVE — A Clarks Grove man has garnered national attention this week after pledging to walk 100 miles in an effort to raise money for COVID-19 relief.

Ninety-nine-year-old World War II veteran Mickey Nelson can be seen walking the streets of Clarks Grove on most any day the weather allows it. Now, about a month before his 100th birthday, Nelson has pledged to walk 100 miles by the end of the summer.

Nelson is hoping people see his story and join him in supporting the Salvation Army Northern Division, one of his favorite charities.

What started out as a challenge from his daughters quickly grew into something more. On Sunday, KARE 11 out of Minneapolis featured Nelson’s story, and word quickly spread throughout the country. After his story was televised, Nelson has been interviewed by numerous local TV stations and newspapers, the Minneapolis Star Tribune and even Good Morning America and CNN International. As of Friday morning, the fundraiser had raised over $48,000.

Nelson talked about seeing the story grow and spread across the country and what inspired him to start the fundraiser.

“I’m amazed by what has happened,” Nelson said. “It came in at the right time. I think Memorial Day was probably a lot of help on that, too. … I’ve gone through the days of the Depression and there’s been other incidents, too. I remember in the newspaper clippings seeing bread lines that were as long as you could see. Lately I’ve been watching TV, and I’ve seen cars lined up miles long to get their food.”

Nelson said he has always been lucky enough to have food on the table and wants to help others who might not be able to provide meals for their family during the pandemic.

The Salvation Army service centers have been on the front lines of food distribution since the pandemic, began and distributions have gone up by as much as 900% in some locations, according to a press release.

“We have been working very hard to help those in need since mid-March,” said Lt. Col. Lonneal Richardson, commander of The Salvation Army Northern Division. “Our staff is working overtime and our resources are being stretched like never before. But this effort being made by Mickey is truly selfless, and we are grateful for and inspired by his efforts.”

Nelson has set routes he walks through the streets of Clarks Grove — one is a half mile and the other is a full mile. He logs his distance in a notebook each day. He said he had completed about 25 miles as of Wednesday afternoon. Provided the weather cooperates, he estimates he will have all 100 miles completed by the end of August or beginning of September.

Nelson has lived in Clarks Grove all his life and still lives in the same home he was born in. He started a successful bus company in Albert Lea when he was in high school and owned it for 58 years. One of his favorite things to do is talk to his wife, Margie, who is housed at Oak Park Place in Albert Lea.

Anyone wishing to donate to the cause is encouraged to do so at SalvationArmyNorth.org/mickey. Checks can also be made out to the Salvation Army and mailed to Mickey Nelson PO Box 232, Clarks Grove MN 56016. Nelson plans to take those checks to the Salvation Army in person when the timing is right.