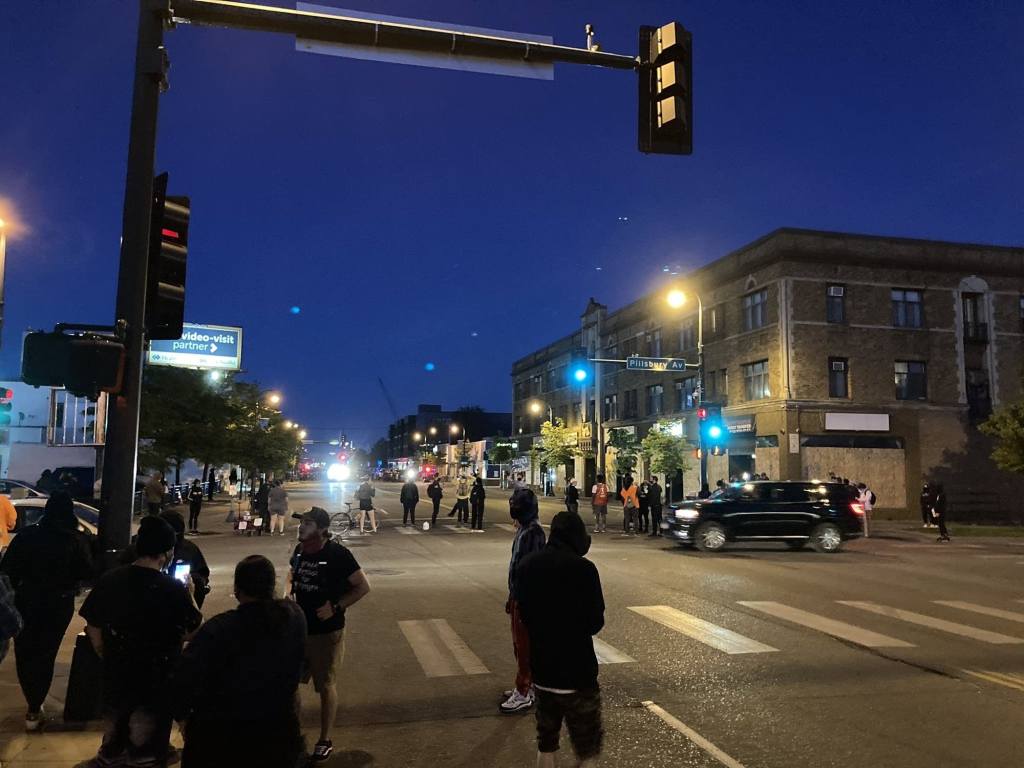 A small crowd stands near the intersection of Lake Street and Pillsbury Avenue in Minneapolis Saturday.Evan Frost/MPR News

A rapid, overwhelming response by the Minnesota National Guard and law enforcement, together with the willingness of many to heed an 8 p.m. curfew, helped restore order in the Twin Cities Saturday overnight into Sunday.

After several nights of fires, looting and mayhem with Minneapolis at the center, state officials pushed back with a surge of National Guard soldiers and Minnesota State Patrol troopers to support local police.

“Tonight it went far better,” Paul Schnell, the state corrections commissioner and part of the leadership team overseeing the response, said just after 1:30 a.m. Sunday. There was an “overwhelming number of resources brought to bear” and “a tremendous level of community support for the curfew.”

The larger law enforcement presence made for a faster response during the night.

That included pushing back against a crowd in Minneapolis near the 5th Precinct police station, an epicenter of Friday night’s mayhem. Days earlier, protesters overran and burned the Minneapolis 3rd Precinct headquarters.

Saturday was different. Schnell said the crowd around the 5th Precinct Saturday night scattered when confronted. That kind of response and reaction seemed to be the norm through the night.

“We are committed to do whatever it takes to bring order,” he told reporters earlier in the evening.

The influx of National Guard soldiers and State Patrol troopers made the difference, Minneapolis Mayor Jacob Frey told MPR News early Sunday. “Clearly we did not have the numbers in (Minneapolis police) alone,” he added. “Additional force was necessary.”

Overall, crowds appeared to be significantly smaller and less organized than they were Friday night and early Saturday morning. There was action, but much less than in the past week.

Minneapolis police say they were shot at by one of three people they came across on patrol near the 1400 block of Lake Street. The three were arrested and a gun was recovered.

At the Lake Street/Marshall Avenue bridge separating St. Paul and Minneapolis, St. Paul police cleared hundreds of people from the area. Chief Todd Axtell said those protesters were believed to be headed toward the Capitol before they were turned back.

St. Paul police said officers had stopped several vehicles during the night driving around the city without license plates. Each time officers stopped the vehicles, the people inside ran away.

Earlier in the evening, a National Guard helicopter scooped up water from Lake Nokomis to put out a car fire.

Officials had been bracing for a possible fifth night of unrest following the killing of George Floyd in Minneapolis police custody. Gov. Tim Walz, along with state and city leaders, pleaded with residents to stay home and obey an 8 p.m. curfew.

At an early evening press conference, his third of the day, Walz vowed that the National Guard, which he fully activated earlier, and city and state law enforcement would restore peace and security. The Guard said it had more than 4,100 soldiers working to restore order in the Twin Cities, part of the state’s largest-ever civil deployment.

That came a day after thousands of people flouted the curfew to protest Floyd’s death, some of whom looted stores and set fires. State officials took an additional step of closing the area’s interstates from 7 p.m. till 6 a.m.

But as the sun set on Saturday evening, no one could say what the night would bring.

Walz and other leaders had spent the day calling for calm. They’d also asserted that much of the violence was being perpetrated by people from outside the area, including white supremacists, anarchists and drug cartel members.

“Whether they’re from Minnesota or not, if they’re out there tonight, they’re not sharing our values,” Walz said.

Photos and videos circulated on social media of alleged white supremacists who may have initiated violence.

Leaders hoped those protesters would soon go home. “We’re asking for you to let the National Guard have the street after 8 p.m. so that we make sure we can restore order,” Minnesota Attorney General Keith Ellison told reporters at a noon briefing. “We need to be able to stop the burning and the looting and the destruction.”

As darkness fell, the highways closed and a curfew took effect. A tension hung over the Twin Cities — and there was  hope among many residents that another night of violence could be avoided.

“This is a moment where we get to rehearse our shared humanity,” said St. Paul Mayor Melvin Carter.

Meanwhile, Walz said he expected the same people who’d set fires and looted stores in previous nights to return to the streets.

“We’re prepared for that,” he said.