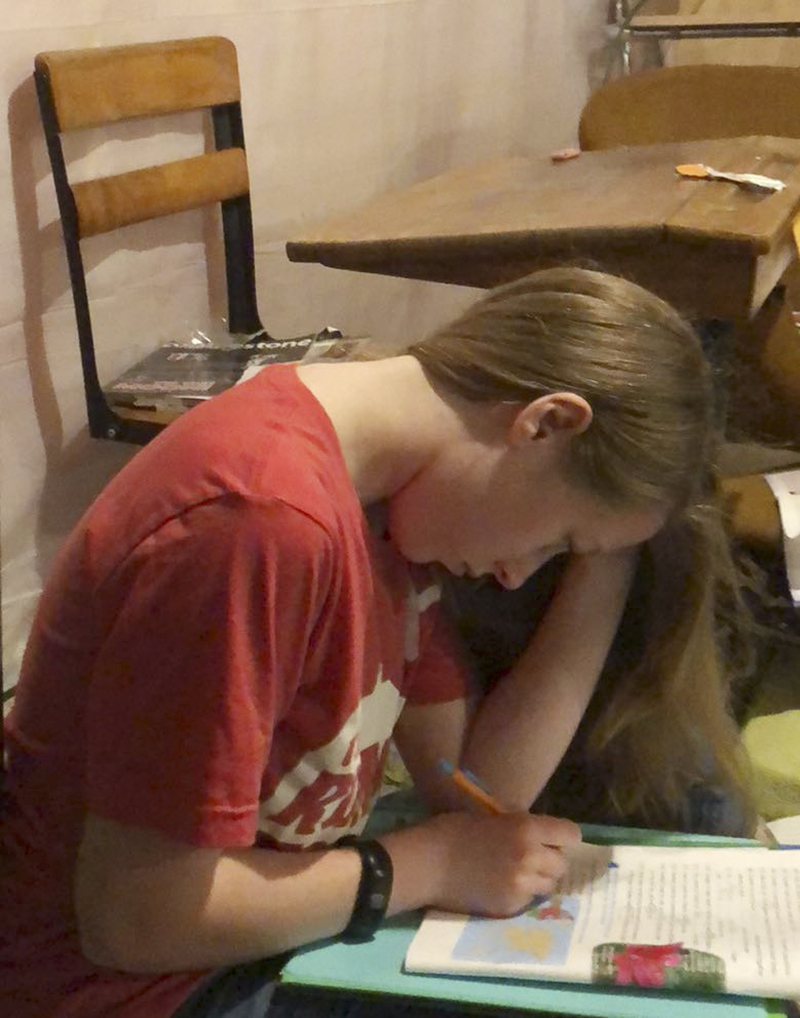 Kenzie Patten of Albert Lea works on her schoolwork from home at the end of April. Patten has been homeschooled with her siblings their whole lives. - Provided

As area students enter their final weeks of the school year, two homeschool mothers are sharing their advice with parents of public school students who have been guiding distance learning in their households since March.

Juana Raatz, who has seven children, including two who live on their own and five ranging from 7 to 16, said her family has been homeschooling for 12 years.

Raatz said one of the reasons she and her husband, Nathan, decided to homeschool was because they felt God calling them to do it. Initially, they also wanted to provide individual attention and instruction to the children, which would include Christian studies.

“The reasons why we homeschool has changed over the years,” she said. “Those reasons are still important, but truly there is so much more we’ve discovered.  Homeschooling is a lifestyle. It is simplicity and togetherness, having time to play to discover and pursue passions. It’s about family relationships and getting to serve others outside of our immediate family.

“Homeschooling is not always perfect, but it is priceless,” she said. “And we would do it all over again.”

The family lives out in the country, and she said their typical day starts at 6:30 a.m. with the children doing animal chores. After that, they do bedroom chores, eat breakfast and clean up, and then school starts at 8:30 a.m. They start with seat work, which is individual for each child and then have a break at 10:30 a.m. After the break, they work on history, science and geography, and then break for lunch at 12:30 p.m. After lunch, the children pursue individual studies, which include extra science, a second language, music lessons, reading books, projects and building things.

She said she considers a successful day one where everyone is having fun with wherever they are in the school day. It also helps to have a loose schedule and to be consistent.

“I would say to parents who are struggling to remember this is new to everyone,” she said. “Don’t try to do it all and do it perfectly. It’s OK if some days are great and others are not. Focus on the good days. Take breaks. Have fun with your kids, and be flexible. I once heard, ‘A tree that doesn’t bend breaks.’ And remember to laugh.”

Raatz said parents should not be afraid to reach out to friends and share their struggles with each other but they should not compare themselves and their child to anyone else because each child is unique.

She also said to remember that school does not have to be confined to a table or desk.

“Go outside, on the couch, on the deck — wherever your child feels good doing their school work,” Raatz said. “Get lots of fresh air, and spend some time recharging yourself. It will look different for everyone.”

Amy Patten, who has four children, ranging from fifth grade through 12th grade, has homeschooled her children for 13 years. She said over the years they have tried many different curriculum choices, with their most recent change being about three years ago.

When they started homeschooling the children, her husband worked the 3 to 11 p.m. shift, so school was often from 4 p.m. until 6 or 7 p.m.

“There were those rare exceptions when one of the kids would drag their feet and not get work done until dad got home, but those times would be rare,” she said. “The timeline now is because the kids work best with a goal.”

They do school no less than two hours a day, with no more than four on any given day.

The children’s goal is to get as many lessons done — correctly — in that time frame. If an assignment comes in and is graded at less than an 80, it is returned until the grade becomes an 80 or higher.

She said over the years, the challenge has come with busy schedules.

Before COVID-19, school had to be done no later than 2:30 p.m. so her oldest two children could make it to work, and on Mondays school was done by 12:30 p.m. for music lessons. They also have to find time to deliver the Freeborn County Shopper on Tuesdays.

She said there have been rewards to homeschooling.

“To see them thrive when learning at their pace is amazing,” Patten said. “To see those lightbulb moments peek through when they finally figure out something that’s been a struggle. It has taught them to independently think for themselves, so they problem solve on their own. Sometimes those are really great ideas, sometimes, not so much. They learn from those negatives, build upon them and come back with better ideas that work.”

She said for parents who have struggled with distance learning, they should remember that everything will be OK.

“Everyone got thrown into the same situation as you,”  Patten said. “Take a deep breath. Relax. Set daily goals that are easy to attain for your kiddo. Maybe let them work an hour or two and then give them some recess time to burn off energy (or catch up on Facebook posts). The new has worn off, but the adventure awaits. Embrace it!”