Jean (Robertson) Anderson was born Feb. 27, 1933, in Albert Lea, the daughter of John and Emelia (Untiedt) Horan. She grew up in the rural Geneva-Hartland area with three brothers and two sisters. She attended school in Albert Lea. 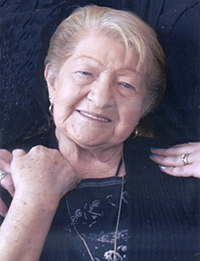 She began working at Northern Valley, where she met Ralph Buringa. They married and had three children, Sandi, Bob and Dan. After they divorced, Jean began working at Cottage Café in Geneva.

She met and married Neil Robertson and they added children Debb and James to their family. She was happy to get back to her farm roots and they lived on several farms in the Geneva-Ellendale area. Tragedy struck and Neil died in a car accident in 1965. Jean began working at Geneva Market to support her family, and continued working there until 1978.

She later found happiness again and was united in marriage to Harold “Wimpy” Anderson. He preceded her in death in 1992. Jean remained in Geneva until 2004, when she moved to Kasson to be closer to family. Jean has been a longtime faithful member of Community Lutheran Church in Geneva. Her faith and her family meant the world to her.

Jean was lovingly known as Gran to not only her family, but to so many more people whom she loved and loved her.

Jean was a magnet for children. She cared for many, they were all considered family and all called her Gran. This could have something to do with the fact that she was funny, a good listener and a great foundation to lean on.

She loved puzzles, animals (especially her feline companions), watching gold finches, family reunions and making amazing Special K bars. She volunteered at the food shelf and the clothes closet in Kasson. If she could help someone, then she would, no questions asked. She supported her family in any way she could, with words and actions.

Jean was the epitome of a role model, a great friend to many, a great teacher in life, a loving wife, a wonderful mother, grandmother and great-grandmother. Her family and friends will miss her!

Private family graveside services will be held. These services can be viewed live at 10:30 a.m. Monday at www.bonnerupfuneralservice.com. Condolences may also be left on the website, or cards sent in care of the Anderson family to Bonnerup Funeral Service, 2210 E. Main St., Albert Lea, MN 56007.