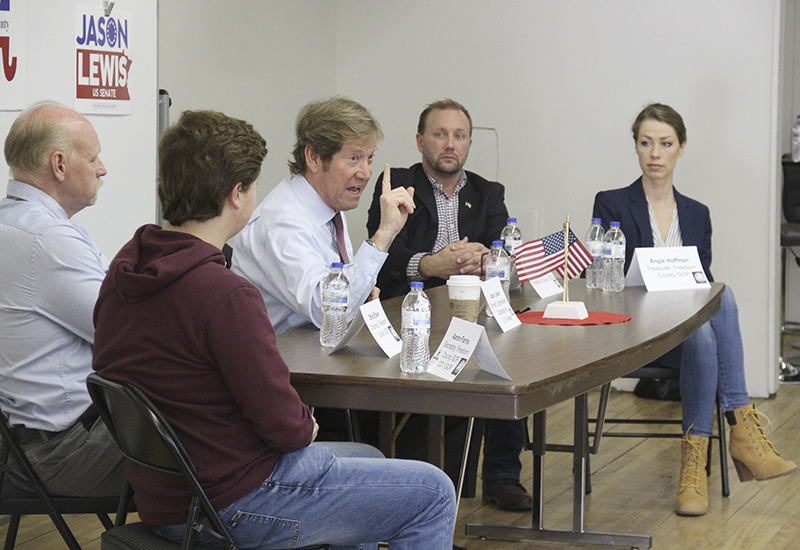 Minutes before Minnesota Gov. Tim Walz announced he would extend the state’s stay-at-home order another two weeks, U.S. Senate candidate Jason Lewis and a group of business professionals in Albert Lea met to discuss the need to reopen the state for business.

Lewis, a Republican, is running against Democratic U.S. Sen. Tina Smith, who was appointed to the seat in 2018 to replace former U.S. Sen. Al Franken. Lewis previously served one term in the 2nd District of the U.S. House of Representatives.

Lewis, who met with a group of people at Robert Hoffman Realty in downtown Albert Lea, said he thinks evidence shows that all that is being done with the stay-at-home order and business closures or modifications is delaying the onset of COVID-19 and prolonging the period the most vulnerable would be at risk. He said this was the first time in his life that he has seen healthy people be quarantined.

Lewis said this is leading to a rise in mental health issues and suicides, and he said he thinks health care costs that result from the restrictions will be worse than the costs from the virus itself.

“They’re going to dwarf anything we’re going through with COVID,” he said. 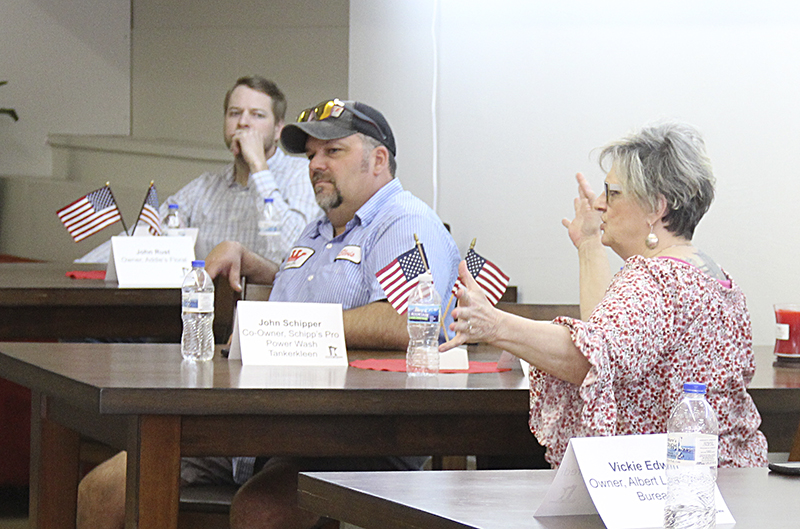 Peppered Cow owner Dori Etheridge speaks about her concerns of festivals and other outdoor events being canceled in the coming months. Sarah Stultz/Albert Lea Tribune

He said he feared some politicians are using COVID-19 to expand their power and said he is trying to be a voice for small business owners, many of which are struggling.

He also said he is worried about people who need treatment such as hip replacements and biopsies, whose problems are worsening as they have not been able to be seen, and farmers who are having to euthanize hogs because processing plants are closed.

The markets need to start functioning, he said.

“This is not a matter of market failure or the markets failing to function,” Lewis said. “This is a matter of the government killing the market.”

John Schipper, co-owner of Schipp’s Pro Power Wash and TankerKleen company, asked why restaurant and bar owners are being punished when people can go to places such as Walmart and it seems everyone is touching everything.

Dori Etheridge of Peppered Cow, a food truck that started last year, said she was worried about all of the festivals and other outdoor events that are being canceled that she would normally attend.

She asked why people can’t just be conscientious about the space around them.

Lewis said it comes down to trusting Minnesotans to do the right thing.

“Let’s not exacerbate this any further,” Lewis said. “Let’s get back to work. We can do the things we need to do to make certain the elderly are safe, and we’ll defeat this thing like we’ve defeated every other virus….We’ve never taken measures like this before.”

Lewis has traveled to other places around the state, including Cloquet, Duluth, Good Thunder and Mankato.