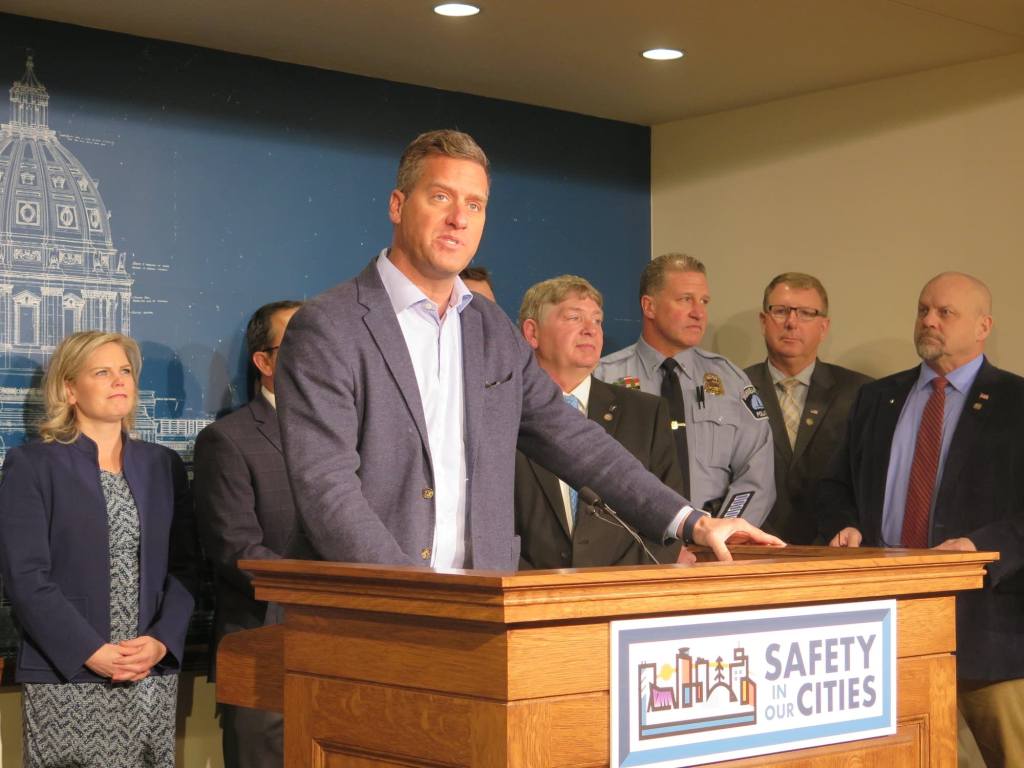 House Minority Leader Kurt Daudt was joined by his Republican colleagues as they announced a series of anti-crime proposals on Feb. 17. Daudt announced Saturday that the House GOP will block passage of a package of infrastructure projects unless Gov. Tim Walz’s emergency powers end.Tim Pugmire/MPR News

Republicans in the Minnesota House of Representatives are playing hardball in their effort to end the emergency powers Gov. Tim Walz has assumed in response to the COVID-19 pandemic.

Walz declared a “peacetime emergency” on March 13 in response to COVID-19, which gave him the power to close schools and businesses. These emergency powers are authorized by a decades-old law, with two key restrictions: the emergency powers need to be ratified by the state’s Executive Council of senior statewide officeholders, and can be overturned by a majority vote of both houses of the Legislature.

Republicans have a majority in the Minnesota Senate and have criticized Walz’s use of power “without consultation at least from the Republicans in the Senate.” The House has a DFL majority, the same party as Walz, and has defeated Republican attempts to end Walz’s order.

But the so-called “bonding bills” that the Legislature usually passes in even-numbered years such as 2020, where the state borrows money to fund infrastructure projects around the state, need a three-fifths majority to pass. That means the Democratic majority needs Republican votes to pass a bonding bill, and on Saturday Daudt said those votes are contingent on ending Walz’s emergency powers.

“The time for quick action is passed. I think it’s time for a thoughtful approach with the Legislature engaged,” said Daudt, R-Crown.

Democratic House Speaker Melissa Hortman, DFL-Brooklyn Park, said in a statement that “ending the peacetime emergency declaration before the emergency has passed would be reckless.”

“It’s disappointing to see the minority leader threaten to block much-needed investments in local jobs and projects in our communities,” Hortman said. “Governor Walz and his administration have served the people of Minnesota well during this crisis, and his thoughtfulness is why Minnesotans overwhelmingly approve of his actions.”

Walz spokesman Teddy Tschann said the governor “is working with Minnesota lawmakers on both sides of the aisle, a bipartisan group of Midwest governors, and the White House” as part of its COVID-19 response, and urged support for a bonding bill as a step toward recovery from the economic collapse that followed the pandemic and quarantines.

Daudt said House Republicans were behind him on making a bonding bill contingent on ending Walz’s emergency powers, even though that might mean his members taking a tough vote against important projects in their district.