Onto their next mission 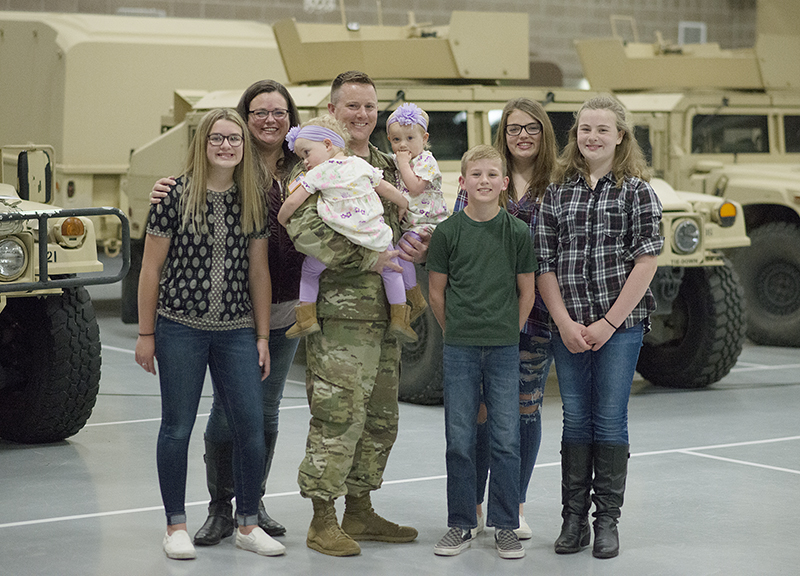 First Sgt. David Enser stands with his wife, Keli, daughters Gracie, Ramsie, Sophie, Hazel and Mable, and son, Edison. Enser will leave for Camp Ripley in June before being deployed to the Horn of Africa later this summer as a part in the Minnesota National Guard’s Mankato based 2-135th Infantry Battalion. - Tyler Julson/Albert Lea Tribune

In the first week of June, nearly 700 soldiers from the Minnesota National Guard Mankato 2-135th Infantry Battalion will depart for Camp Ripley in Little Falls in preparation to be deployed to the Horn of Africa as a part of Operation Enduring Freedom.

The soldiers will serve as part of a task force to improve security posture at U.S. installations and forward operating bases in the AFRICOM region, while maintaining a rapidly deployable force prepared to respond to crisis, according to a press release.

The installations and bases are located in multiple countries in the Horn of Africa including Djibouti, Eritrea, Ethiopia, Somalia, Kenya and others.

First Sgt. David Enser and Staff Sgt. Trevor Nelson are two of the local soldiers who are being deployed.

Enser, who has had a wide range of duties on past deployments said it’s going to be a little different for him this time around as he will be in charge of the entire Delta Company, about 100 soldiers. He said his main duty will be to make sure his company completes the jobs they are tasked with doing.

Enser, a fifth-grade teacher in the Albert Lea school district will deploy with a wife and six children at home. His wife, Keli, daughters Gracie, 15, Ramsie,13, Sophie, 12, and Hazel and Mabel, 2, and son Edison, 11,  said they will be sad to see their father go, but are very proud of his service.

“The challenging part is always thinking about the stateside and the family,” Enser said. “Just being gone and making sure everything is taken care of. Of course with six kids, making sure that the family has the support they need.”

However, with the advent of newer technology, Enser said it will be easier than ever to stay in touch with his family back home. He said pretty much anytime they have down time he will be able to call and Skype back home.

Keli Enser said she has been through his deployments before, but this will be the first time with six children.

“The first and second deployments I think were much more difficult,” Keli Enser said. “Babies were born on both of those deployments so the third one seemed a little easier. Now, being able to talk as often as I’m sure we will be able to will be nice.”

Enser’s children had their own reasons they will miss their dad. Ramsie Enser said she will miss being able to hang out with him every single day and eat ice cream with him. Sophie Enser said she is nervous for her dad to be gone this time around because she is older and understands what’s happening now. Edison Enser said he will miss him because he won’t be able to help his father out around the house and do work with him.

Enser said the most rewarding part of this deployment is being deployed as a first sergeant.

Like Enser, Nelson had a range of duties in previous deployments and will be in a new role this time around.

“This mission I’m a platoon sergeant, which means I’ll do a lot of clerical work and administrative work,” Nelson said. “I won’t be running missions much as a platoon sergeant, that’s not the job. My job is beans and bullets, is what they say. Just making sure you’re taking care of the welfare of the soldiers in your platoon.”

For Nelson, this will be his first deployment with a wife and children at home. His wife, Kristi, a kindergarten teacher in Albert Lea, and their two children aged 5 and 3 will be at home.

Kristi and Trevor Nelson were dating at the time of his third deployment, and Kristi said it’s going to be harder this time because of their two children.

“It’s going through it now with kids,” Kristi Nelson said. “Just taking on that single parent role, but not letting them think dad’s gone. He’s gone for just a little while. Just mostly going to miss him helping with the kids and taking on those house roles.”

Despite the difficulties, Kristi Nelson said she is proud of her husband, and she said she will have a lot of support from other military families.

Trevor Nelson said it will be hard for him to leave home but also feels a great amount of pride in the work he will be doing in Africa.

“The numbers are changing, but I’ll have anywhere from 14 to 20 soldiers underneath me,” Nelson said. “My last deployment I was the leader of five soldiers. Now we’re tripling that essentially. It’s my responsibility to make sure that they’re bettering themselves and they are becoming a better soldier and a better civilian as well … just making sure that they’re successful before, during and after the deployment, that will be the rewarding thing.”

The 700 soldiers in the deployment will leave from Camp Ripley on June 19 for Fort Hood, Texas, for final preparation before leaving for Africa. The soldiers will return to Minnesota in the spring.