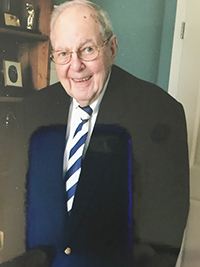 Dick was born Aug.20, 1923, in Kimball, the son of Elmer and Achsa Jensen. He grew up in Albert Lea and met the love of his life, Betty Anne Hansen, in the first grade. He graduated from high school, where he was president of the senior class, in 1941, and he and Betty Anne married in 1943. She preceded him in death in 2003.

Following his military service from 1943 to 1946 in Germany and France during World War II, he returned to Albert Lea to start his family and to begin what became a long and distinguished career. He loved to work, first weeding onions when he was 8 years old and finally retired at the age of 89. After the war, he worked for Western Grocers until joining Mobil Oil, where he held many positions. He served as president of SuperAmerica for 15 years and five years as group vice president of Ashland Petroleum Co. He was president and CEO of Cumberland Farms (MA) and worked as a consultant after that. For many, he is considered the “father of convenience stores,” and received a variety of awards for service in that industry.

He will be missed by many who loved him and are grateful for his long and healthy life, especially his children Nancy Agneberg (Bruce) of St. Paul, Scott (Teresa) of Northfield and Amy Stark (Ted) of Edina; along with his grandchildren and great-grandchildren Kate Agneberg Ostrem (Mike) of St. Paul and their children Maren and Peter, Geof Agneberg (Cricket) of Cleveland, Ohio, Andrew Jensen of Edina, Celie Jensen Petty (Christian) of St. Paul and their children Felix and Harriet, Phillip Stark of Edina, Marissa Stark of Minneapolis and Allison Stark of Chicago. He is also survived by his sister, Helen Slegh, of Albert Lea and other extended family and dear friends.

Common RAJ refrains were “That’s the way it is” and “Your day will come.” His day has come, and he eased into his death prepared and without fear.

His faith was central to his life, and memorials may be made to Normandale Lutheran Church in Edina, where he was a longtime member. Private graveside services will be at a later date. Condolences can be left at www.washburn-mcreavy.com.