Roger was born in a lovely farmhouse southeast of Easton in Faribault County on May 18, 1930, to Paul H. Giese and Elda L Boeck. Roger sadly passed away on April 27, 2020, due to natural causes. Roger was buried at Willamette Memorial Park in Albany, Oregon, on Friday, May 1. 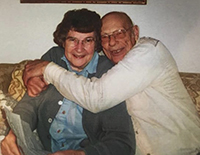 Roger’s family lived north of Wells until Roger’s father, Paul, died due to an auto accident on Christmas Eve of 1938 when they moved into Wells, and Roger attended school. When Roger was 11 years old, he started working by setting pins in a bowling alley. He started working on construction in 1948. On Jan. 24, 1950, Roger and Alvina (Gina) Evan got married and worked for the Corp of Engineers on the Owahe Dam project on the Missouri River.

They later moved back to Minnesota, and Roger worked for Tonka Toys in Mound in the shipping department. Then Wilson and Co. hired him until 1959, when they moved to Oregon. Roger then went back to construction work. He worked for the state of Oregon on the maintenance staff at Oregon State University in Corvallis, Oregon, and the University of Oregon in Eugene, Oregon.

He had his own construction company until 1976 when they moved back to Albert Lea. He then worked out of the Union Hall and worked on different construction sites in Minnesota, Iowa, Wisconsin, North Carolina and Arkansas. He enjoyed just getting into the car and seeing what is on the other side of the next hill, camping, fishing and an occasional trip to the casino.

He was preceded in death by his parents; his sister, Ardella, and her husband, Norman Hosley; Roger’s wife, Alvina; and five children by the names of Kathleen, Bonita, Robert, Paul and David; his mother- and father-in-law Steve and Balbina Evan; his sisters-in-law Anna Evan and Irene Jean Evan of Minnesota Lake; and his brothers-in-law James, Eugene and David Evan. He is survived by his sister-in-law Joyce Evan of Wells and many nieces and nephews.