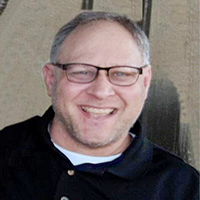 He was born August 27, 1970, in Detroit. He was adopted at 6 months of age by Glenn and Joan (Benney) Brownewell. Tim moved throughout the United States, living in six different states. He attended Stone Mountain Christian School in Atlanta. He lived in Romania, helping his father with mission work. In 1994 he returned to Minnesota and made his home in Owatonna.

Tim met Michelle Juveland at Bethel Baptist Church and they were married July 11, 1998. He worked for Service Master, Top Notch, Wenger and most recently for Ritchie Bros Auctioneers. In his younger years he enjoyed wrestling, boating, fishing and traveling around the world. Tim also enjoyed hiking, camping, going out to eat and visiting with family and friends, and playing with their dog, Jinger. He especially enjoyed spending time with his sons and attending their Cub Scouts activities. Tim had fun doing everything he did, and everyone loved him. He will be greatly missed.

Tim was an active member at New Life Community in Owatonna.

Tim was preceded in death by his father-in-law, Duane Juveland; and maternal and paternal grandparents.

A graveside service will be at Forest Hill Cemetery in Owatonna. A celebration of Tim’s life will be at a later date.