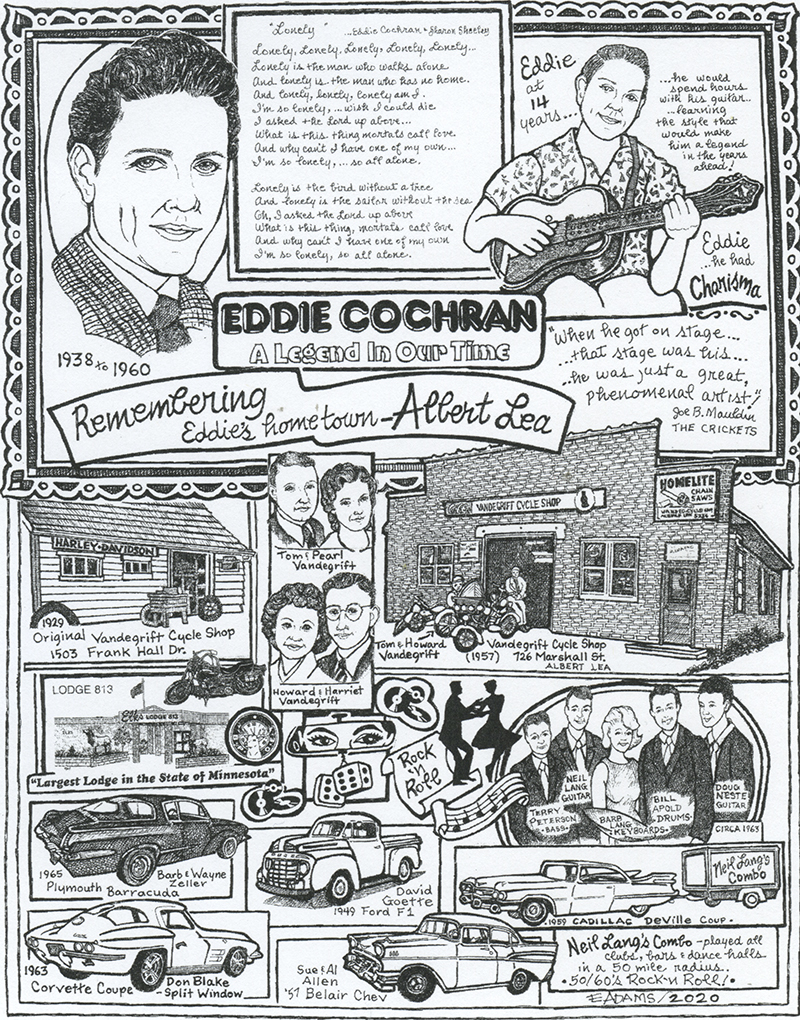 A rendering of the 2020 Eddie Cochran print made by Eloise Adams. - Provided

Freeborn County Historical Museum announces the creation of the 27th Eddie Cochran print, according to a press release. The print is done to remember Eddie Cochran and also to remember his hometown of Albert Lea. The artist is Eloise Adams.

At the top right is Cochran at age 20, when he was on tour in England. To the left top is 14-year-old Cochran playing his guitar. His mother, Alice, said he would have played that guitar 24 hours a day if she would have let him.

Below right is shown the original Vandegrift Cycle Shop in 1957 at 1503 Frank Hall Drive, which opened in 1929. Also shown is the second location of the cycle shop at 726 Marshall St. in 1957. Left to right in front of the shop are Tom Vandegrift and Howard Vandegrift. Also depicted are Howard and Harriet Vandegrift in their wedding picture from Jan. 20, 1945, and Tom and Pearl Vandegrift.

Also shown is The Neil Lang’s Combo, made up of Terry Peterson on bass, Neil Lang on guitar, Barb Lang on keyboard, Bill Apold on drums and Doug Nestie on guitar. They played all clubs, bars and dance halls in a 50-mile radius. A 1959 Cadillac Coupe Deville pulling Neil Lang’s Combo trailer is depicted.

Cars that appear near the bottom:

Also depicted is Lodge 813 Elks Lodge, once the largest lodge in the state.

On every print are the lyrics to one of Cohran’s songs. “Lonely” is the song selected for this print.

Prints are numbered and signed by the artist. They are available to be viewed or purchased at Adam’s Originals. A select number are hand painted.

The original print can be seen at Freeborn County Historical Museum, which has a  large Cochran display.