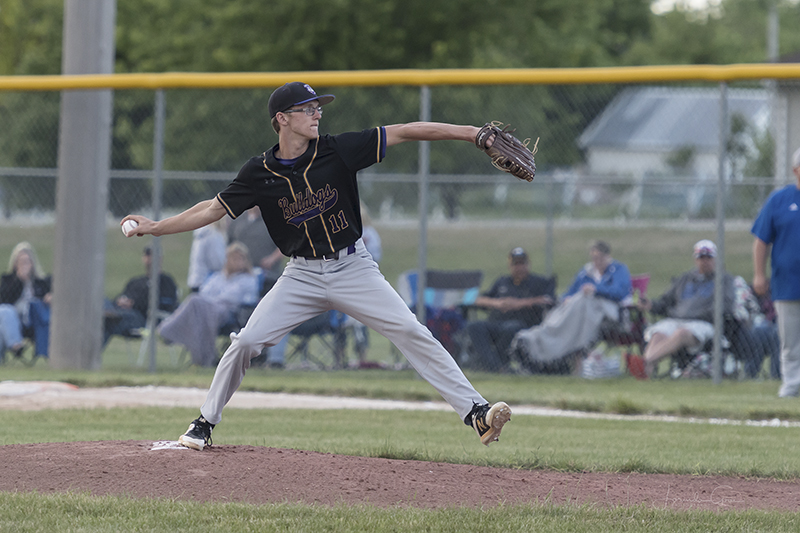 Returning senior Mason Fritz throws out a pitch in a game last season. Fritz, along with junior Casey Hanson, will be leaned on to provide pitching experience as the Bulldogs hope to finish season near the top of the Top of Iowa Conference. - Lory Groe/For the Albert Lea Tribune

After an 18-11 season in 2019, the Lake Mills baseball team is looking to come back this year and be in the running for both a district title and a Top of Iowa Conference championship.

Last season the Bulldogs ended their season in the substate quarterfinals with a 3-0 loss to the Chickasaws of New Hampton. They finished seventh out of 18 teams in the Top of Iowa Conference standings.

To get to the upper tier of the conference this season is going to be a tall task, as perennial powerhouse and defending state champions Newman Catholic wait at the top.

“Our goals are the same every year,” said head coach Chris Throne. “We want to contend for a conference and district title. We need to be playing our best ball a month from now.”

The Bulldogs bring back a host of other players as well, many of whom were major role players on last year’s squad. Seniors Colby Groe, Tyler Helgeson, Parker Rogstad, Jackson Rice and Logan Prescott, as well as juniors Carson Eaton, Dalton Thorson and Jack Ramaker all saw time on the field last season.

“I think our biggest strength as a team is our experience together,” Fritz said. “We have played with each other for years and we work well together because of it. We also understand what to do in many different situations due to our experience as a team.”

With the entire spring sports season canceled, the future of summer sports remained up in the air for much of April and May. In late May, Iowa Gov. Kim Reynolds announced the summer sports seasons would be able to resume practices June 1 and the first games could be scheduled for June 15.

In order to practice and play in those games, all teams needed to develop a plan of action in regards to protecting players, coaches and fans as well as follow a strict set of guidelines put in place by the Iowa High School Athletic Association.

Despite the late start and the new guidelines, Throne said the team was prepared and ready to get the season started.

“The first week of practice went about as well as it could have under these circumstances,” Throne said. “The kids were energized and ready to go. It was a lot of fundamentals mixed with live situations. The hardest part about the new guidelines was just getting used to them. The adjustment from our normal routine to now took some time.”

Fritz agreed with his coach when it came to getting used to the new guidelines. Fritz said the biggest change so far was having to clean everything regularly after each use and keeping distance from his teammates as much as possible.

The Bulldogs will kick off their season at 7:30 p.m. Monday with a home game against the Eagles of West Hancock.

Schedule may change throughout the season. For the most up to date schedule, visit topofiowaconference.org/public/genie/97/school/4/.