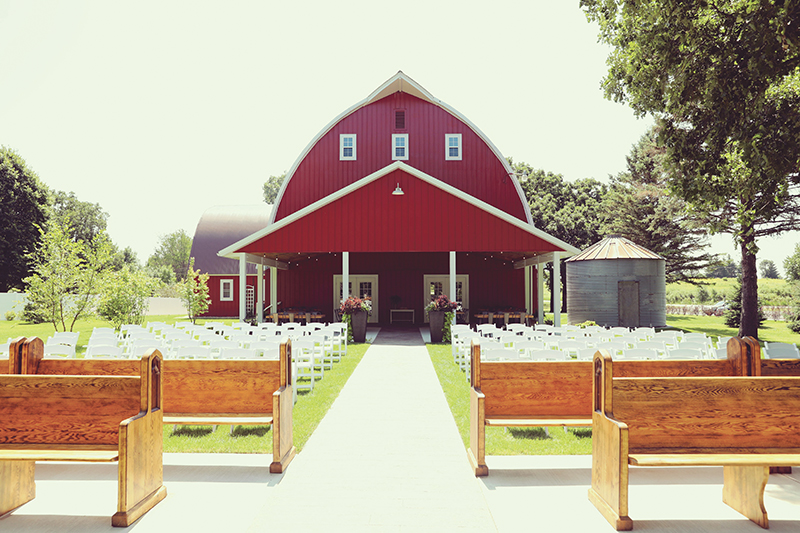 Chad and Jayne Iverson purchased the former Sons of Norway barn in 2017 and transformed it into The Barn of Chapeau Shores. - Photo courtesy Emelia’s Photography

The Albert Lea City Council on Monday voted to amend the conditional use permit of The Barn of Chapeau Shores to allow later weekday hours for events.

The barn will now be able to be open until 11:30 p.m. Sundays through Thursdays, 3 1/2 hours later than its former hours, and until midnight on Fridays and Saturdays. It can open at 8 a.m.

Chad and Jayne Iverson, owners of the barn, had requested their hours be changed to better accommodate events and asked that their business be given the same opportunities as other businesses in Albert Lea to be open later hours. They said they would require music to be turned off by 10:30 p.m. with renters leaving the property no later than 11:30 p.m.

They referenced other venues such as Green Lea Golf Course and Wedgewood Cove that are able to be open until 1 a.m.; City Arena, which is open until 11:30 p.m.; and Edgewater Pavilion that is open until 10 p.m.

The Iversons said they have lost customers because they are not able to be open later hours — which in turn decreases business for other vendors in the area that offer wedding-related services. They said many of the couples who utilize the wedding barn are from out of the area and bring with them families who will stay in Albert Lea’s hotels and utilize other businesses in the community.

In addition to the request for a change of hours, the Iversons also requested they be able to add a small, round, welded wire bin and split rail fence on their property and requested that language in their permit be amended to state that alcohol on site must be provided by a business with an on-sale liquor license or caterer’s permit. They wanted to apply for a liquor license for in the event someone they are working with does not have that license. In addition, they requested language in the permit be amended to state that noise shall not exceed maximum levels allowed by the Minnesota Pollution Control Agency.

Albert Lea City Planner Megan Boeck said staff and the Albert Lea Planning Commission had recommended denying the change of hours but approving the other requests. The reason for denying the change of hours was because the business is in a residential zone and had the potential to threaten quality of life for people with next-day job requirements or school-age children during the week.

She said the barn was different from other event venues because of how the area is zoned and because of how it directly abuts several other residential properties.

Boeck said Wedgewood Cove is in a planned development district that accommodates it being open later and said people who are building homes in that development do so with that understanding. She noted Green Lea Golf Course was put in place before the city’s present zoning controls and said City Arena does not directly abut any residential properties.

Interim City Manager Jerry Gabrielatos read letters that had been turned in for public comment that were in favor of the request, including some neighbors and a representative of the Albert Lea Hockey Association. The neighbors talked about how the barn was an asset to the neighborhood.

Third Ward Councilor Jason Howland said he knew quite a few people who were against the barn before it was renovated, who have since changed their opinions. He said he thought the request for hours was reasonable, particularly when public parks can be open until 10 or 10:30 p.m.

Sixth Ward Councilor Al Brooks said though he and the council normally follow the advice recommended by the planning commission, the recommendation this time was not acceptable to him.

The council also approved allowing the business to be open until 12:30 a.m. on New Year’s Eve.

• Approved an agreement with the U.S. Department of Transportation’s Federal Aviation Administration to allow a remote communications outlet to be operated and maintained on the Albert Lea Airport property through Sept. 30, 2025. The equipment is used by both pilots at the airport as well as being used as part of a regional system. This has been in use for several years and the agreement allows an extension of those services.

• Approved a joint powers agreement with the state of Minnesota for use of a propane trailer for firefighter training for five years. Albert Lea’s fire department would assume the control, care, storage, upkeep and maintenance of the trail and would be required to insure it.

• Approved a lot division through a certificate of survey for property owned by the Albert Lea Economic Development Agency near Ross Drive in the Habben First Addition.

The entities have implemented the abatement to encourage new home construction.

• Approved an easement agreement with Minnesota Energy Resources to install a gas pipeline through a portion of Sondergaard Park. City staff approved the route.

• Approved reduced garbage and demolition rates for Bancroft Township for the garbage and material it cleans out of ditches and brings to the city’s landfill.

• Declared a 2002 Nissan Sentra and its contents as unclaimed and abandoned property and authorized the city to sell it via a public sale following a published notice.

• Accepted a $25 donation to the Albert Lea Police Department.