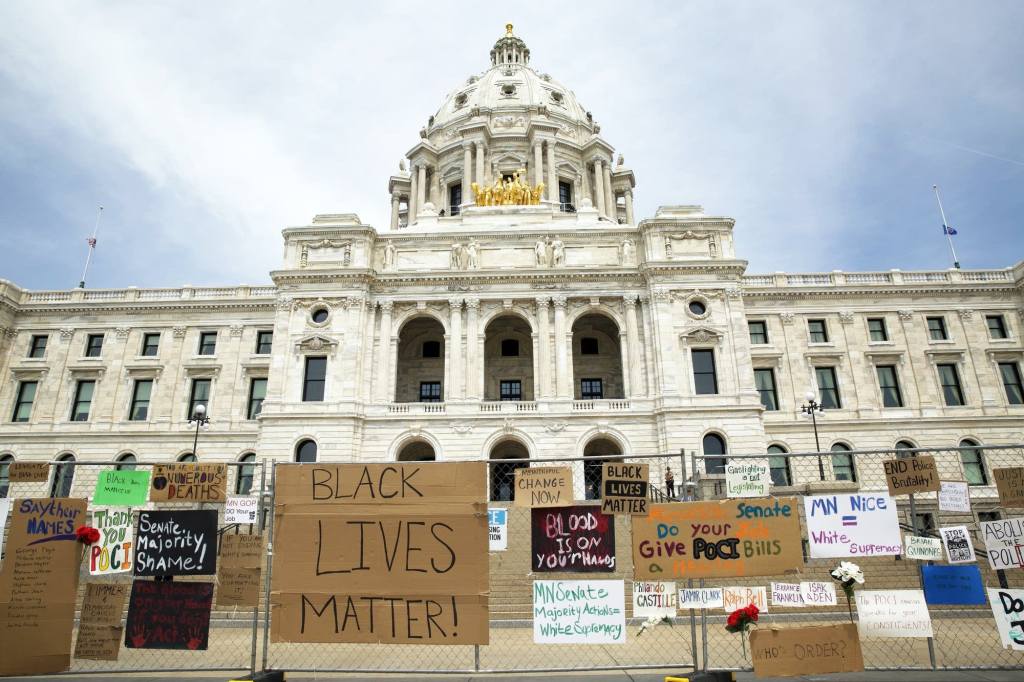 Signs calling for racial justice are seen in front of the State Capitol building on Juneteenth in St. Paul. Christine T. Nguyen/MPR News

Under intense pressure to act and after a week of trying, Minnesota lawmakers ended a special session Saturday morning without reaching agreement on a police accountability package and other major agenda items.

They were unable to break through a stalemate and prevent a letdown to people who saw the killing of George Floyd at the hands of Minneapolis police as a rallying cry for long-sought change aimed at soothing racial tensions involving police.

While private discussions took place throughout the night, the final day was spent debating how to distribute more than $841 million in local relief tied to the coronavirus pandemic, a plan to help Minneapolis businesses rebuild after the destructive civil unrest that followed Floyd’s death, and a series of smaller leftover items from the prior session.

None of the major items, including a borrowing plan for public construction projects, made it across the finish line before the Senate adjourned just after 6 a.m. Saturday.

“We’re not walking away from Minnesota here, but I think we could all benefit from a breather,” said Senate Majority Leader Paul Gazelka, just before the Senate approved his motion to end the special session.

Democrats in the minority voted against the motion, saying Republicans should keep working into next week.

Speaking mid-evening Friday, Gov. Tim Walz held out hope of a compromise on at least the policing measures, saying that lawmakers needed to seize on the momentum for real change that would restore trust between the police and the people they serve.

“I think Minnesotans expect us to do the work and not set an artificial deadline. We have negotiated in good faith today,” Walz said on TPT’s “Almanac” program. “It’s obvious there is a lot of passion, and that’s understandable.”

“Without a deadline it goes on and on and on,” Gazelka said, expressing a willingness to return for another special session if other agreements come together. He said a bonding bill and a tax plan couldn’t be done in time for consideration.

The police issues took on the most urgency.

The Senate, controlled by Republicans, and House, led by Democrats, passed markedly different plans to alter policing through new regulations around training, standards for justified use of deadly force and consequences for on-duty misconduct.

There was some overlap: Both moved to greatly restrict or outright bar the use of chokeholds or neck restraints that proved fatal for Floyd, a Black man who died after a white Minneapolis police officer kept a knee on his neck for more than seven minutes on Memorial Day as bystanders recorded Floyd’s death on their phones. Each would require fellow officers to intervene if they witnessed excessive force.

Senate proposals would have also expanded training, including more attention to crisis intervention and de-escalation.

Late Friday, Republicans put forward a new system of arbitration to decide if fired or disciplined officers could return to their jobs. It could kick cases to an administrative law judge when the sides can’t agree on how matters should be handled.

Gazelka said nearly a dozen changes were on the table.

“You can’t say it’s not a good faith effort,” he said, adding that he would draw the line on taking money away from law enforcement agencies or automatically restoring voting rights to people released from incarceration.

That was still fewer proposals than passed in the House.

Walz and the House Democratic majority wanted to go further in curbing warrior-style training that some say leads to confrontation. They proposed creating a new independent unit to investigate police-involved deaths and that the attorney general prosecute those cases. Other initiatives would have created more civilian oversight of police and let cities require their officers live closer to where they patrol.

“We have to do something on police accountability and reform,” said House Speaker Melissa Hortman. “The tragic murder of George Floyd on May 25th changed the entire legislative agenda. There is no way for us to look away from this injustice and not do the work that thousands of Minnesotans and millions of people around the world are demanding that governments take up.”

Throughout the special session, Republicans kept up criticism of Walz for his handling of the COVID-19 pandemic. As the situation improves, they want Walz to ease back on restrictions and relinquish the emergency powers he’s had in place since March.

Senate Republicans began the special session last week by voting to end the peacetime emergency extended by Walz. The DFL House did not follow suit.

Walz said Friday that he’s looking for ways to wind down those emergency powers in an orderly fashion.

The disagreement prevented passage of a bonding bill in the House during the regular session.

The powers have come up during closed-door negotiations. Walz said he agrees with Republicans that too much power in one branch of government is not the right thing.

“What I’ve told them is I am more than willing for them to incorporate into statute things and take them off my plate. They don’t disagree with many of the executive orders,” Walz said. “They would just rather do them themselves. I’ve asked them if they can find ways to do that, please do.”