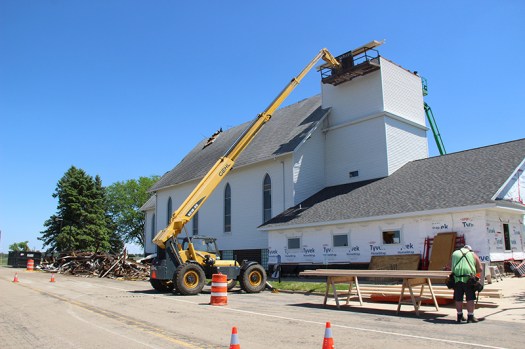 Crews work to board up the top of the church where the steeple was damaged during the storm Tuesday afternoon. Sarah Stultz/Albert Lea Tribune 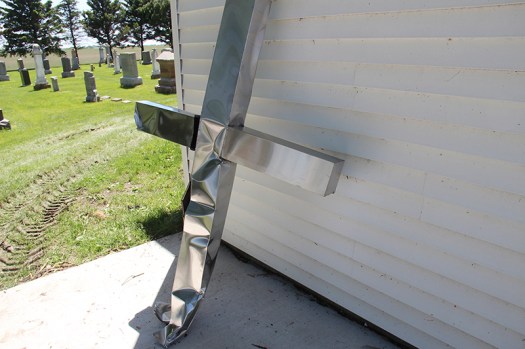 The cross from the top of the steeple of LeSueur River Lutheran Church sits at the back of the church after damage from the storm Tuesday evening. Sarah Stultz/Albert Lea Tribune 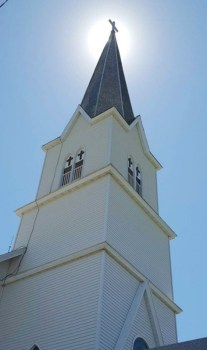 The steeple at Le Sueur River Lutheran Church in New Richland is seen in tact in this picture from 2016. Provided 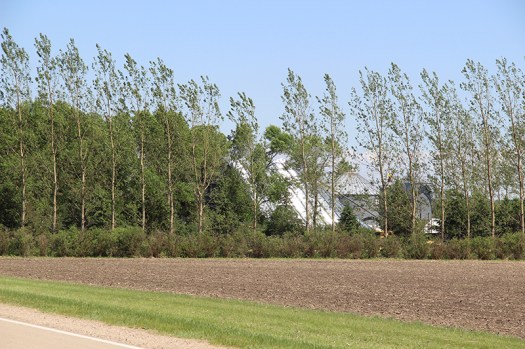 Other damage was also reported off of 250th Avenue down the street from the church in rural New Richland including uprooted trees and a damaged grain bin. Sarah Stultz/Albert Lea Tribune

A longstanding feature of the landscape in rural New Richland changed Tuesday night after heavy winds and rain brought down the steeple of the LeSueur River Lutheran Church.

Steven Woyen, pastor for both the LeSueur River and Vista Lutheran congregations, said he was already scheduled to meet at the church that evening for a meeting about resuming in-person worship services, but little did he know what he would find when he arrived at the church.

Woyen, who has been pastor of the congregations since last July, said he is not sure yet whether the damage is the result of straight-line winds or a tornado, but the debris from the steeple was found in the roadway and on the boulevard next to the church, along with the 1,200-pound bell that was inside.

The church had not yet resumed in-person worship yet because of the COVID-19 pandemic and was already in the middle of renovating the front entrance of the building because of damage from heavy snow on the roof in the winter of 2019.

The pastor said he was grateful most of the remainder of the building seems to have avoided damage, though there might be other minor damage to the roof. The church property also sustained a few uprooted trees, though no gravestones were damaged in the surrounding cemetery.

Though he was shocked at the damage, he said he was relieved nobody was hurt.

The LeSueur River Lutheran congregation was started in 1861, with the current building constructed in 1875. He said the steeple that was destroyed was built over the original steeple at the end of the 1800s around the turn of the century..

Woyen said some of the cleanup at the church started right away Tuesday night, and the debris has been pushed over to the side of the road to allow passage on the roadway as directed by the sheriff.  The cast-iron bell, which sustained some damage, has also been taken to a safe location.

Woyen said he was thankful that the company already at the church working on the renovations agreed to help board up the area where the steeple had been until the church figures out a plan to move forward.

He has already had contact from people who aren’t members but who have had family who were members or who were buried at the cemetery asking how they can contribute to the cleanup and repairs.

“Even today driving down here, it’s unnerving not seeing the steeple,” Woyen said. “To members, nonmembers alike, you know where you were because of the steeple.”