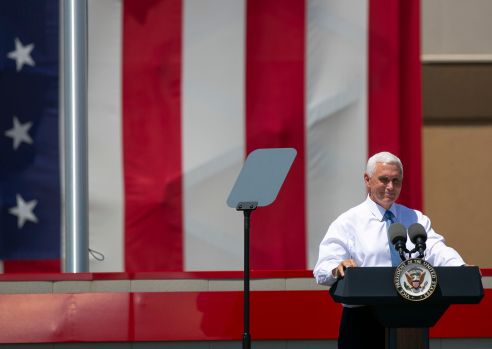 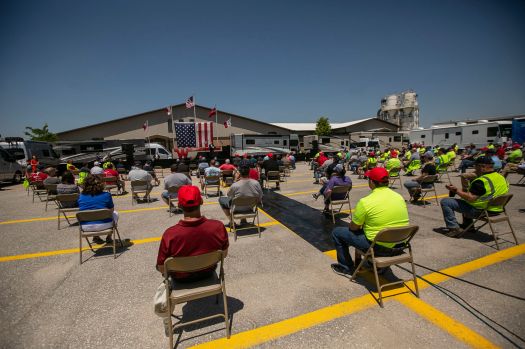 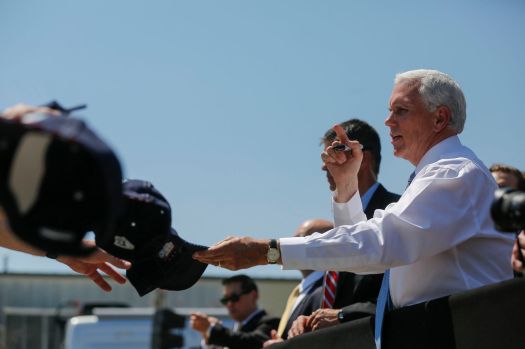 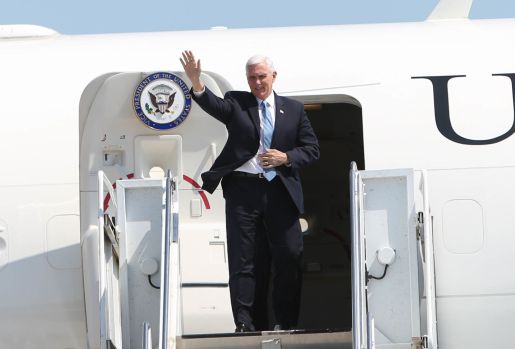 In Vice President Mike Pence’s visit to Winnebago Industries in Forest City on Tuesday afternoon, he wasn’t shy about calling the RV manufacturer a crucial part of the “Great American Comeback” around which President Donald Trump’s 2020 campaign has framed its reelection bid.

At least half-a-dozen times, Pence, who was joined by Gov. Kim Reynolds, and state Sen. Randy Feenstra, used the phrase while also thanking the 200 to 250 socially distanced Winnebago employees from across all departments that turned out to hear him speak.

“The comeback today would not have been possible without your work,” Pence told the crowd which included former Iowa Speaker of the House Linda Upmeyer (R-Clear Lake). Through May 2020, the national unemployment rate is at 13.3%, which dropped from 14.7% in April. (In mid-April, Winnebago laid off 79 employees due to the COVID-19 crisis impacting the demand for the company’s products.)

Before the speech, Pence toured the facility with Gov. Kim Reynolds and Deputy Administrator of the Federal Motor Carrier Safety Administration Jim Mullen. According to press pool reporter Gordon Lubold of the Wall Street Journal, Pence got a tour of the factory floor and “saw pieces of big recreational vehicles, windshields, wood pieces and other raw material, all primed for assembly.”

When Winnebago decided to shut down its factory floors in late March, Winnebago Industries President and CEO Michael Happe said that one of the first phone calls he made was to Reynolds.

“I wanted her to know firsthand how serious of a decision this was for us as a major employer in the state to care for the safety of our employees. That we would work to take care of those employees from a health care support standpoint and that we would look to reopen safely and return our team to work when the time was right,” Happe said.

One employee at the event, Lydia Thompson, said that it was cool that Pence wanted to visit Forest City and see how people do things at Winnebago Industries. “I think Pence and President Trump are doing the best job they can and they’re doing a great job,” Thompson said. Jonathan River, another employee at Winnebago, said he got to speak with Pence beforehand and called it “amazing.”

Along with employees, there were also 50 nearby protesters marching down 335th Street and South Fourth Street in Forest City who could be heard during several of the quieter moments from Pence’s speech.

In recent weeks, the Trump administration has been criticized for its handling of nationwide protests which were sparked by the deaths of black Americans such as George Floyd and Breonna Taylor at the hands of police. Trump himself has amplified conspiracy theories about protesters at individual events while also calling for stronger presences from police and the military.

Tuesday morning, Trump signed an executive order, his 162nd, that would “leverage federal grant money to encourage police departments to meet a set of standards, including a ban on chokeholds except when an officer’s life is at risk” according to reporting from NBC. Pence mentioned the signing during his speech and said that the administration will continue to move an agenda that “promotes public safety.”

The administration has also continued to take criticism for the way it’s responded to the COVID-19 pandemic which has now claimed the lives of more than 118,000 Americans. In a press release, the Biden campaign called Trump’s handling of the pandemic “one of the most consequential failures of government in American history” while Preya Samsundar, a spokeswoman for the Republican National Committee, framed the trip as “yet another sign of the great American comeback.”

Pence’s own personal account on Twitter called growing concerns about a “second wave” of COVID-19 cases in the fall “overblown” despite the fact that the Centers for Disease Control and Prevention has repeatedly warned of a second wave. During the speech on Tuesday, Pence noted that America leads the world in testing without mentioning that the country also accounts for more than a quarter of reported deaths worldwide.

The 48th vice president started his day in North Iowa at the Mason City Municipal Airport where Air Force Two touched down at 10:49 a.m.

There he was greeted by Reynolds and Feenstra along with at least a dozen supporters, including Cerro Gordo County Republican Committee member Nancy Rockman who said she was there to support the vice president and president “in our times that are going on.”

Rockman mentioned the ongoing nationwide protests against police brutality as a marker of those times and said that they’re being led by people that are not patriotic.

“They don’t care about the country, all they care about is looting. It doesn’t have anything to do with George Floyd’s death,” Rockman said. During his speech later in the day, Pence said that what happened to Floyd was “a tragedy and a disgrace” but also castigated looters and rioters and said there was “no excuse” for such behavior.

Pence then stopped at Sally’s in Forest City which had just re-opened for dine-in service that morning and prides itself on home-cooked food and homemade pies. State Sen. Feenstra (R-Hull), who recently defeated Rep. Steve King in the Fourth Congressional District Republican primaries, was there with Pence and Reynolds and said a prayer before the meal.

According to Forest City Mayor Byron Ruiter, the last time a vice president or president visited was 1987 when then Vice President George H.W. Bush came to give a speech at Waldorf.