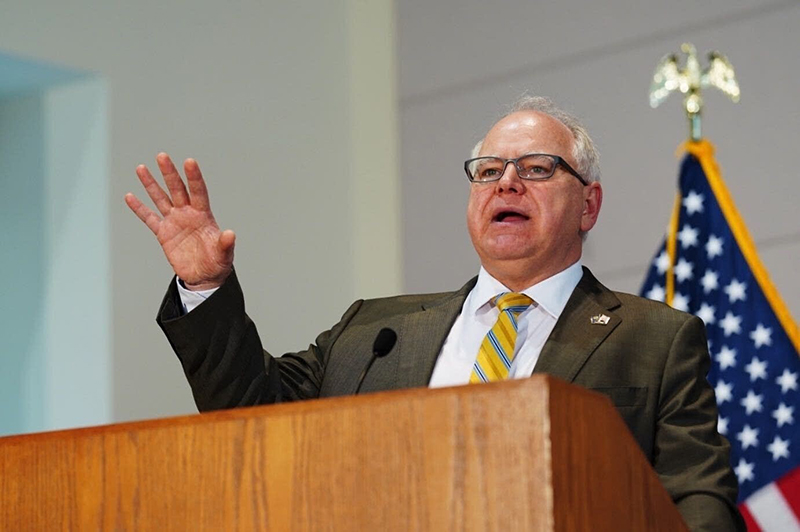 Gov. Tim Walz speaks at a press conference in St. Paul on Wednesday as he announces a special session that is set to start Friday. Evan Frost/MPR News

Gov. Tim Walz on Wednesday said he’s calling a special session set to start on Friday. He wants lawmakers to tackle a public projects spending bill as well as issues of police accountability and economic equality in the wake of the killing of George Floyd.

“We will not Minnesota Nice our way out of the situation we find ourselves in. This requires bold action,” Lt. Gov. Peggy Flanagan said of the criminal justice and economic equality agenda she and Walz want considered, including a statewide ban on the police chokeholds and other use of force tactics.

“The time to debate and walk away is over,” Walz said. He declined to put a date on when the special session would end.

The governor’s comments come hours after Minneapolis Police Chief Medaria Arradondo vowed to make sweeping changes in his department in the wake of Floyd’s killing in Minneapolis police custody.

Among his first steps, Arradondo said he is withdrawing from contract talks with the police union and will seek changes on issues of force, the role of supervisors and how officers are disciplined and fired.

Wednesday also marks the first day that COVID-19 restrictions take a step back as businesses reopen, including indoor bar and restaurant service at limited capacity.

‘Every solution on the table’

Earlier in the day, Minneapolis Mayor Jacob Frey mentioned the state’s mandatory arbitration process as something that needed changing in order to set the Minneapolis police on the right path. Arradondo expressed frustration over the challenges of trying to fire a police officer accused of wrongdoing.

Walz, a longtime teachers union member and strong union supporter, acknowledged such changes make some union supporters uncomfortable but he said that union members need to stand up to change a system that shields the kind of behavior that contributed to George Floyd’s death.

“We have to be prepared to put every solution on the table and debate it,” he said.

Walz was asked about the next phases of reopening the economy while still managing the spread of COVID-19.

Recent numbers show that the daily counts of people currently hospitalized or needing intensive care has leveled out and appears to be dropping. Those are key metrics for state health leaders and good news they are dipping, although officials say a resurgence is possible and that Minnesota cannot be complacent as citizens return to bars restaurants and other social spaces.

“It feels to me like this thing has plateaued,” Walz told reporters. If that’s the case, he said, thre can be more discussion about expanding youth sports, camps and professional sports. He pencils in July 4 or earlier. Expects better idea in 10 days.