Gov. Tim Walz has spent months making the case for a big package of public works construction projects. The Legislature typically passes what’s known as a bonding bill during their short even-year sessions, but amid the COVID-19 outbreak, it didn’t pass a bill before time ran out on the regular session. 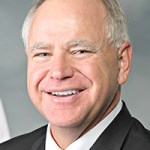 Now, Walz argues the need is even greater, and the bill will create jobs during a down economy.

Construction workers have the most to gain from a bonding bill.

Jennifer Mudge, an electrician and union official with the IBEW in Minneapolis, said Walz is on the right track with his Local Jobs and Projects proposal. She said that the pandemic put many workers on the sidelines and that the bill can also help communities recover from rioting that followed the killing of George Floyd.

“This is our chance to enhance the current bonding bill proposal and expand it to help rebuild the fragile economy and lives that have been affected by this tragedy,” Mudge said.

Walz said he is open to the idea of helping Minneapolis through the bonding bill, but he did not offer a specific plan.

Minnesota Management and Budget Commissioner Myron Frans said one option is to use what are known as appropriation bonds for grants and loans. Those are different from the general obligation bonds the state sells to raise money for public projects.

“The general obligation bond requirements are a little bit more stringent under the Constitution in terms of what we need to pass. But the appropriation bonds — we don’t need to have all the details done,” Frans said. “So, we think there’s an opportunity to perhaps even get something set up in this session if we can listen to people and get some ideas.”

Despite a looming budget deficit, Frans repeated his contention that the state is well-poised with a solid credit rating to take on the added debt.

House Democrats are also eyeing a $2 billion bill. But during the closing hours of the regular session last month, they failed to get the bipartisan, three-fifths super majority needed to pass borrowing measures.

House Republicans withheld their votes to protest Walz’s extension of the emergency powers he invoked to address COVID-19.

Walz said he hopes that they have let that go.

“I’ll continue to work with them, continue to call, continue to publicly state we’re more than willing to try and compromise around some of these issues,” the governor said.

But the opposition apparently still is there. Republican House Minority Leader Kurt Daudt, of Crown, responded to Walz by saying that ending the governor’s emergency powers remains a priority.

Earlier this week, Senate Republicans rolled out a revised bonding proposal of $1.1 billion. That is a slight increase from the $998 million bill they introduced last month. Republican Senate Majority Leader Paul Gazelka, of East Gull Lake, said he would support as much as $1.35 billion for bonding.

Sen. Dave Senjem, R-Rochester, who chairs the capital investment committee, said he hopes they can reach a deal.

“Bonding bills are a journey, all the way back from the first bus trip we took last fall to where we are now,” he said. “Honestly, in the next three or so days, we certainly have a lot of work to do.”

The $127 million in additions in the Senate bill include more money to repair and maintain buildings on college campuses and elsewhere around the state. There is also more money for the Minnesota Zoo, dam safety and Capitol complex security.

The House must pass a bonding bill first, and so far there’s no clear indication when that might happen. Time is running out because Senate Republicans say they plan to end the special session and go home on Friday.