A lake house for the whole family 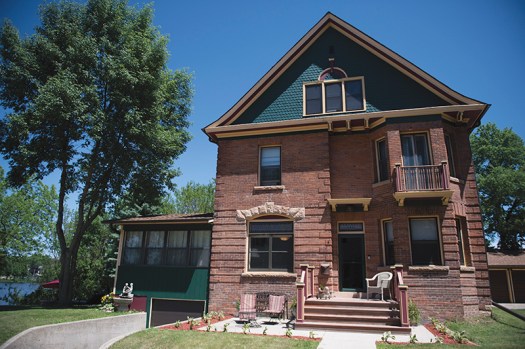 The first thing the Smiths did after purchasing the house was pull down all the ivy off of the front. - Colleen Harrison/Albert Lea Tribune 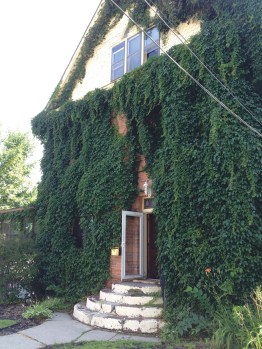 The first thing the Smiths did after purchasing the house was pull down all the ivy off of the front. - Provided 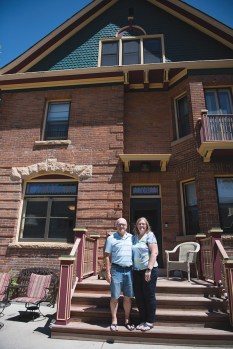 Charlie and Marcia Smith bought their home in 2015 and have been steadily working on it since. - Colleen Harrison/Albert Lea Tribune 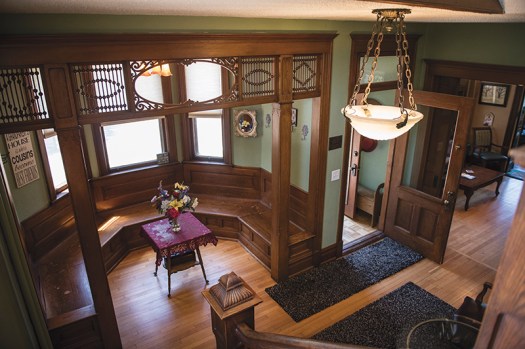 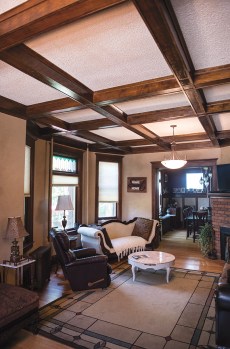 The wooden beams lining the ceiling of the living room are original to the house. - Colleen Harrison/Albert Lea Tribune 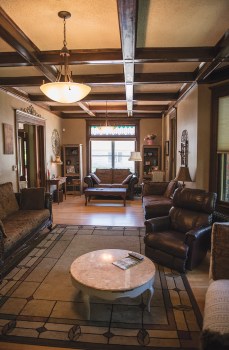 Charlie and Marcia Smith worked to rip out carpeting on the first floor of the home after purchasing it and restored its original hardwood floors. - Colleen Harrison/Albert Lea Tribune 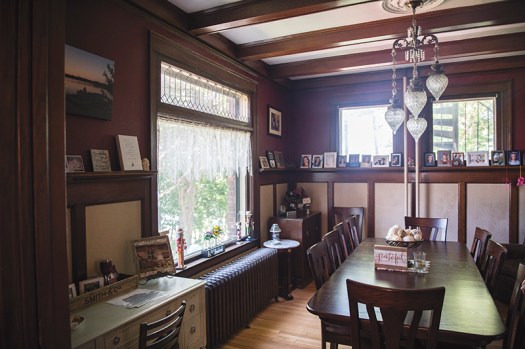 The Smiths have photos of each of their grandchildren, in order by age, lining the walls of their dining room. - Colleen Harrison/Albert Lea Tribune 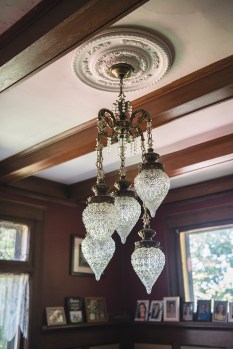 The couple said they have worked to keep as much of the house's original details in tact as possible. - Colleen Harrison/Albert Lea Tribune 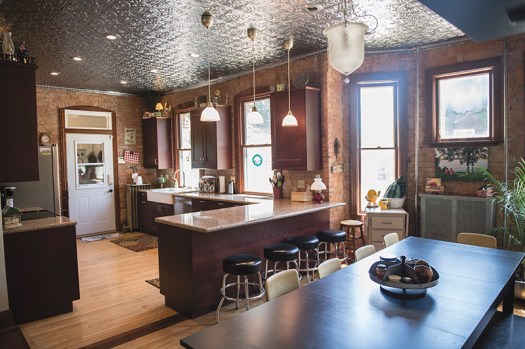 A wall was knocked down to help open up the kitchen of the Smiths' home. - Colleen Harrison/Albert Lea Tribune 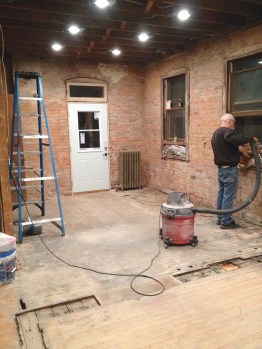 Charlie Smith works on the kitchen of the house. - Provided 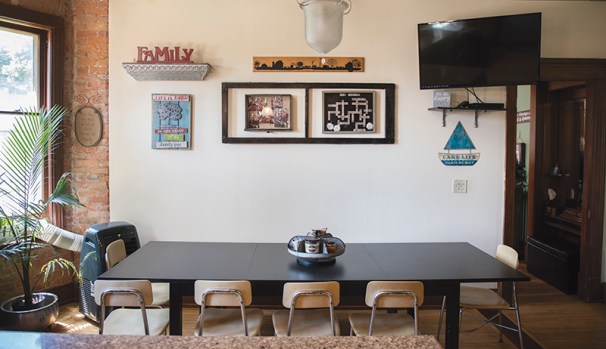 The Smiths bought the house in the hopes that it would be a place for their children and grandchildren to visit often. - Colleen Harrison/Albert Lea Tribune 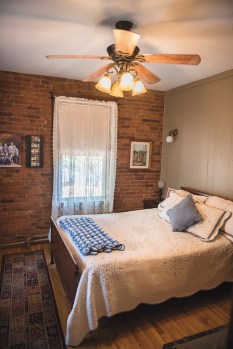 The couple refers to the bedroom pictured as "the Marion Ross room," as they were told it's where she stayed when she visited Albert Lea and the house was still a bed and breakfast. - Colleen Harrison/Albert Lea Tribune 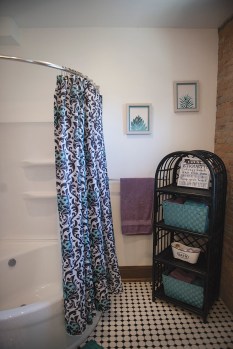 The Smiths made a bathroom out of what they said used to be quarters for two maids to share. - Colleen Harrison/Albert Lea Tribune 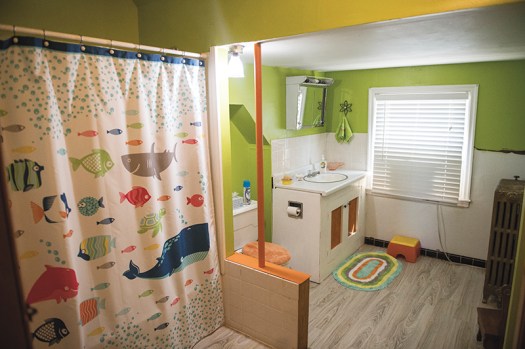 The third floor of the house has more of a beach theme, seen in the bathroom pictured. - Colleen Harrison/Albert Lea Tribune 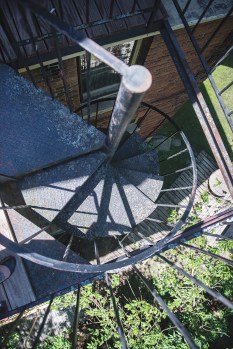 A spiral staircase runs down the back of the house. - Colleen Harrison/Albert Lea Tribune 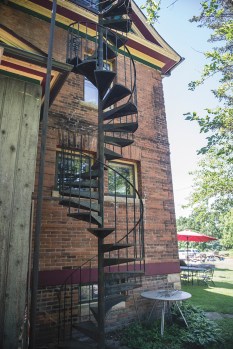 A spiral staircase runs down the back of the house. - Colleen Harrison/Albert Lea Tribune

House with rich history gets upgrades

From the minute Albert Lean Charlie Smith walked onto the property at 310 N. Washington Ave. in 2015, he knew it was a perfect fit.

The house, which had been in foreclosure, was for sale, and he and his wife, Marcia Smith, were looking for a family-friendly home to accommodate their growing extended family for visits.

“The (for sale) sign came up out here, and I brought her over,” Charlie Smith said of his wife. “We walked onto the yard, and I said, ‘This is what we’re going to buy.’ She goes, ‘You haven’t even looked inside.’”

At that time, the house was covered in ivy, so the first thing they did after they bought it was tear down the ivy to unveil the brick that lay underneath.

The house had seven bedrooms and five bathrooms, ample living space, balconies, patios and shoreline access for activities both in the winter and the summer — along with a unique history.

“I just had the vision of the family to have basically a compound here,” he said.

The couple said the house was originally built in 1902 and was initially lived in by the Bessesen family. According to Albert Lea Tribune archives, John and Delia Bessesen and their four sons lived in the house for roughly 20 years. John Bessesen constructed a jewelry store at 208 S. Broadway Ave. in 1885, and one of the sons, William A. Bessesen, had his doctor’s office at the same address, likely on the second floor above the jewelry store.

William Bessesen married Beatrice Gjertsen of Minneapolis, a singer at the University of Minnesota and in Europe, where she received status as a prima donna in the royal opera at Weimar, Germany, for several years. He ultimately had the historic Bessesen building constructed at 224 S. Broadway as a combination opera house and music conservatory for his wife, which later became known as Rivoli Theater.

Marcia Smith said in later years, their home became a women’s boarding house and later a bed and breakfast. There is a room they call “the Marion Ross room,” that “Happy Days” actress Marion Ross stayed in when she came back to Albert Lea.

“There’s so many stories from so many people who have been a part of this house,” said Charlie Smith, noting that he comes across people who have stories about the house frequently.

The couple enjoys hearing the stories as they continue remodeling many parts of the house.

They said when they first bought the house, one of the first things they did after removing the ivy was pulling up the carpet in the house.

The original hardwood floors have been restored — on the main level there is blonde oak, and on the second floor, there is brown maple.

Marcia Smith said they have tried to keep as much as they can in line with the history of the house when possible — the house has all of the original beams and woodwork — and have even received guidance from Brad Kirchner, a member of Albert Lea’s Historic Preservation Commissioner about renovation plans.

They have removed wallpaper, repaired and painted walls, repaired ceilings and had a new porch and patio put in on the front of the house. They had the house painted and a new roof installed. In the kitchen, which they described as their “pride and joy,” they opened up a wall to allow for a larger kitchen and eat-in area, put in new cupboards, quartz countertops and light fixtures, removed other flooring, restored the wood floors, and exposed the brick on two of the walls.

They have added a high-efficiency boiler with a hot water reservoir, have renovated three bathrooms and are in the middle of working on the master suite, which they are making by combining two of the rooms. They added a shower to the small bathroom on the main level adjacent to the kitchen where a dumbwaiter used to be. A bathroom on the second floor includes space that had previously been used for maids’ quarters.

Despite all the changes they have made, many reminders remain of an earlier era with details such as transom windows and pocket doors. Several of the light fixtures also are original.

They said they have plans to remove the carpet on the third level and restore those hardwood floors underneath as well. They also hope to make their three-season porch available to be used year-round and hope to put on a wrap-around porch along the back and side of the house.

A balcony on the third floor oversees parts of Fountain Lake Park, where the Smiths said they like to sit and listen to concerts from Thursdays on Fountain. Next to this balcony is a spiral staircase that runs to the ground level.

They have tried to do as many of the projects on their own if they can around their normal work schedule, as Charlie Smith works for Accuquest Hearing Centers in Albert Lea and Marcia Smith is the director of professional services of Heartland Hospice Services of Rochester. They have also brought in other contractors for some of the projects.

There are a few projects they also work on outdoors when their grandchildren come to visit.

“They think this is their house, too,” Marcia Smith said.