The Mass of Christian Burial for Bernard “Bernie” Priebe will be held at 11:00 AM Friday, July 10, 2020 at St. Clara Catholic Church, Clara City, MN. The Reverend Steve Verhelst will officiate. Interment will be in the St. Clara Cemetery, Clara City, Minnesota. 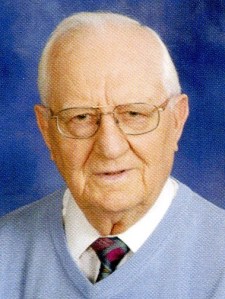 Bernard was born December 25, 1927 in the Township of Stoneham, Chippewa County the son of Arthur and Clara (Harguth) Priebe. He grew up on the family farm and attended St. Clara Parochial School in Clara City. He graduated from St. John’s Prep School in 1945, and attended two years of college at St. John’s University. Bernie was  self employed before being drafted in the Army on October 23, 1950. He was honorably discharged on August 22, 1952. Upon return from the service, he attended the Minneapolis School of Business. He was employed by Farmers National Bank of Alexandria before coming to Albert Lea in January of 1956, to be employed by Wilson and Company.

Bernie married Eva Donner on August 25, 1956 in Degraff, Minnesota. He transferred to Marshall, MO in 1974 to continue work with Wilson and Co., retiring in 1989. They returned to Albert Lea in 1995. He was a member of the Knights of Columbus of 69 years, and was a Fourth Degree member for 53 years. He was a member of the American Legion for 68 years where he served as Commander of Post #56 in 1963 and served as Post/Adjutant of Post 56 for 20 years at different times.  Bernie and Eva loved to dance and the two were inseparable. Bernie was proud to sing in the church choirs in Albert Lea, Willmar, and Marshall, MO. He also enjoyed delivering Meals on Wheels.

Bernard Priebe passed away peacefully on Friday, June 26, 2020 at ThorneCrest Retirement Community in Albert Lea, Minnesota. He was 92 years old.