Minnesota’s upswing in new COVID-19 cases continued Thursday with 745 new confirmed cases, although a recent jump in hospitalizations for the disease has paused.

The Health Department reported 298 people currently hospitalized for the disease with 141 in intensive care. Those key metrics dipped slightly from Wednesday. Still, officials are increasingly concerned about the overall direction of those numbers as new case count rise.

The state also passed a milestone with officials reporting more than 1 million tests for the disease completed since the pandemic began.

Officials reported five more deaths, bringing the toll to 1,594 since the pandemic began. About 76 percent of those who’ve died had been living in long-term care or assisted living facilities, nearly all had underlying health problems. 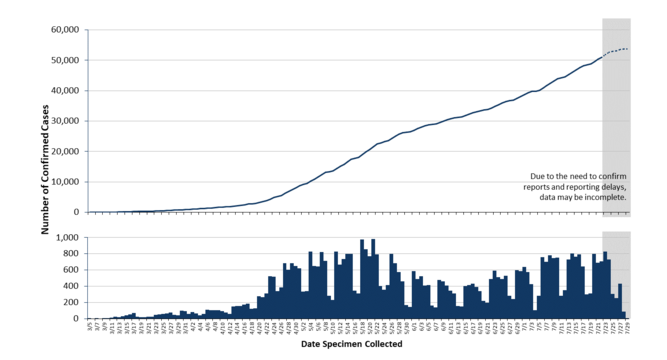 Of the 53,692 confirmed COVID-19 cases during the pandemic, about 88 percent of those infected have recovered to the point they no longer need to be isolated.

All this week, public health leaders have been ratcheting up their concerns that Minnesota is back on the wrong path in its fight against COVID-19’s spread.

With every decision Minnesotans make now about masking or not masking, socially distancing or not, “you are contributing to the solution, or to the crisis,” said Kris Ehresmann, the state’s infectious disease director.

Health officials “cannot do this on our own,” Ehresmann said, adding that success depends on Minnesotans doing the “right thing” in their behavior. Given the massive outbreaks elsewhere in the United States, Minnesota does not want to be like “states that didn’t see the COVID train before it ran them over,” she warned.

The Freeborn County Public Health Department stated the new cases include two people in their 50s and one in their 80s.

There are presently 21 active ceases in Freeborn County, and no one is hospitalized.

Faribault County had no new cases and remains at 78 cases.