Dealing with the long-term impacts of life-changing storms

Rose Olmsted said she had just stepped inside of her home on July 20, 2019, when parts of one of her trees fell down on her back deck and house. - Provided 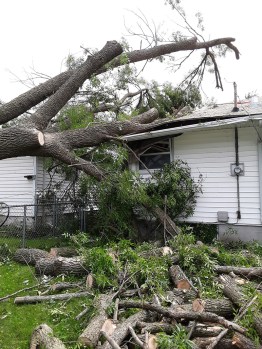 Joyce Purdy's home on Manor Avenue was badly damaged from a June 20, 2019, storm. The storm brought about several downed trees in her neighborhood. - Provided 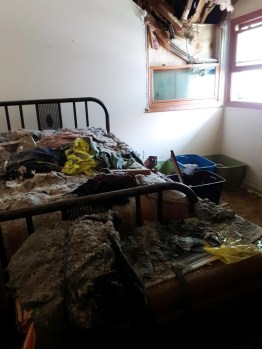 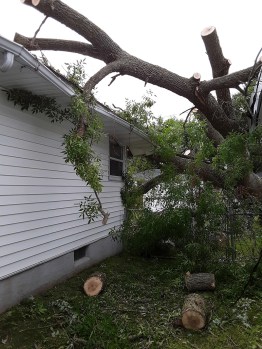 Parts of a fallen tree sit on the Purdys' home on Manor Avenue after a storm July 20, 2019. - Provided 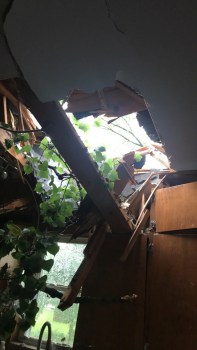 Part of the a tree damaged the kitchen at Abbey Tukua's home during the July storm in 2019. - Provided 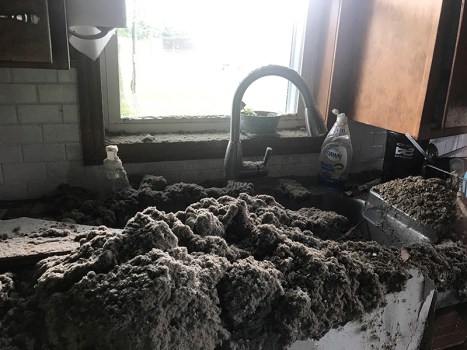 Insulation and other debris sits in the sink of Abbey Tukua's kitchen following a storm in July 2019 that brought down a tree on her house. - Provided

Women share their stories of how storms affected them

The morning of July 20 a little over a year ago, Albert Lea resident Rose Olmsted was preparing to have a dozen guests at her house on Edina Avenue the next day.

After a small storm that morning, the bad weather appeared to have passed, and Olmsted decided to clean up a few branches that had fallen in her flowerbed.

“All of a sudden it got kind of dark,” she said.

In the yard in her bare feet with a saw in hand, she decided to start moving toward the house to play it safe.

She no more than stepped inside the back door off her deck, when she said everything came crashing down, and parts of her more than 50-year-old tree in her back yard fell, damaging her deck, steps, railing, gutters and several parts of the roof of the house.

“I was in shock,” she said. “I’m standing in there, it was pouring — and I said out loud, ‘Well I guess you have more work for me to do.’ That’s the closest I’ve ever been to death.”

She said she believes had she not stepped inside, she would not have survived the destruction.

Now, a year later Olmsted said every time she hears the winds pick up, she moves away from the windows.

‘It just happened so fast’

Next door, Abbey Tukua was getting ready to leave for a wedding when she said it got dark outside and the weather got bad fast.

She said at the time she only had a robe on, so she went to get her clothes on, and then was in the living room, when she heard a sound that she described as a metal tin pan shaking followed by a crash.

At the time she thought it was just a broken window as debris started rolling in. She said she couldn’t get to the basement, so she hid in her room until things calmed down.

When she came back out to check on the damage, she found a large tree limb from her neighbor’s tree had gone through her roof above her kitchen sink and also broke one of the supports of the house.

“It just happened so fast,” she said. “I didn’t know when it was going to stop or what to do.”

A homeowner for only about two years, she said she wasn’t sure what to do next.

She estimated she was finally able to move back in the house about six months later, and it took about nine months for all the repairs to get completed.

She said she couldn’t live in the house because it had asbestos, and the entire house had to be professionally cleaned.

Tukua ultimately had $50,000 in repairs, including the asbestos removal, the roof and her kitchen, which essentially had to be rebuilt.

She said while the anniversary of the storm didn’t bother her, any time there is stronger wind now, she hurries to the basement.

“It’s a bit more traumatic than I thought it was,” Tukua said.

Memories of a ‘war zone’

In the same neighborhood on Manor Avenue, Joyce Purdy and her husband’s home was also damaged by what was ultimately described as “derecho winds” that went on to bring further destruction in Wisconsin.

But Purdy said she and her husband were not home at the time of the storm but instead were in Waterville, where they are seasonal campers. It was her 65th birthday.

She said she received a call from one of her neighbors that their tree had fallen on their house.

They had to pack everything up and then drive back, not knowing exactly what they would find when they arrived.

Right away on the drive back, she said they called their insurance company and their children to tell them what had happened. As they got closer to Albert Lea, they got a call from another neighbor.

Purdy said she and her husband had storm damage the year before at the campground in Waterville, and the new storm brought back the memories of the damage there, which she described as a “war zone.”

When they arrived in Albert Lea, it was raining and dark, and branches were everywhere. They handed off their phone to someone else to take pictures of the damage and then began the process of trying to secure their home from the elements.

The tree busted through the back spare bedroom, and glass and insulation were all over.

In their bedroom right next door, water was leaking through the light fixture and there was damage in the closet.

Their fence and gazebo were damaged, and their ceilings in the downstairs were wet.

They were ultimately out of their house until the middle of October as they took the time to complete the repairs and some other renovations.

Purdy said she was grateful for their circumstances — that they were retired and had savings — and know that this is not always the case for people in their shoes.

She said throughout the process she has felt many emotions about what they have experienced.

The value of listening

As the women dealt with the aftermath of the storm, and the stress that came with unknowns,  finding contractors and negotiating with insurance companies, they said they found comfort in the things they could control.

Purdy said one of the things she could control was her front yard. From people on the street in front of her house, no one would have ever guessed the damage that had taken place there, as there was no damage visible from that view.

Each day she would sit and visit with the neighbors in the front yard and work on her flowers there.

Olmsted said she found solace in people who understood — who would simply listen — and in her volunteer work.

Throughout her career, Olmsted has worked helping others with emotional long-term impacts of trauma in Freeborn County and continues to volunteer with the American Red Cross. She said while she knew what she should do intellectually to deal with her own emotions after the storm, it is different when you’re having to put those practices into action.

The weekend of the anniversary of the storm, Olmsted, the Purdys and another couple got together to visit and talk about their experiences and the highs and lows of their lives over the last year.

They said it was a helpful experience to listen to others who have gone through something similar and just as helpful to share their own experiences.

“I’m grateful I’ve had people who in all this have listened,” Olmsted said.

Common reactions after a natural disaster

• Fear and anxiety about the future

• Nightmares and recurring thoughts about the event

• Changes in eating patterns; loss of appetite or overeating

• Crying for “no apparent reason”

• Headaches, back pains and stomach problems

• Increased use of alcohol and drugs

• Spend time with friends and family.

• Take care of yourself.

• Limit exposure to images of the disaster.

• Find time for activities you enjoy.

• Take one thing at a time.

• Ask for help when you need it.