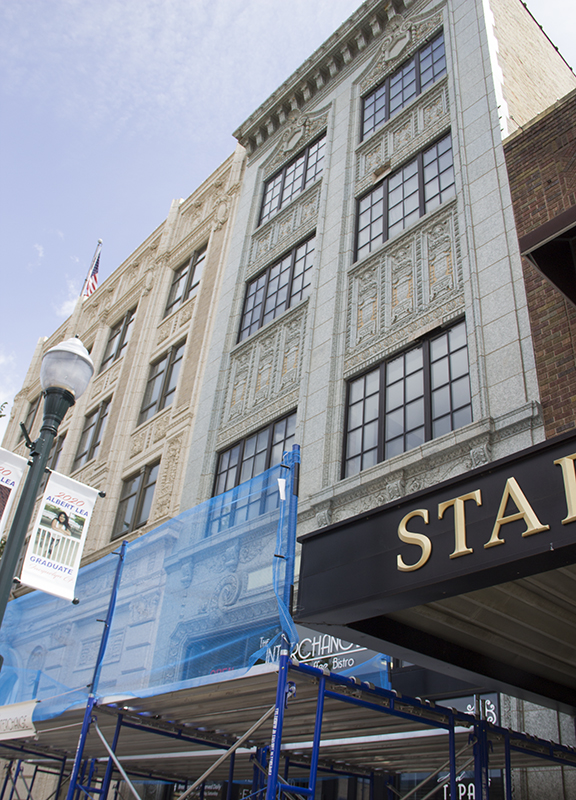 Scaffolding has been placed up around the front of the Jacobson building as a safety precaution for several months. Sarah Stultz/Albert Lea Tribune

One of the downtown buildings owned by the city of Albert Lea is facing continued deterioration and is in need of repair before damage worsens and repair costs rise, the city’s building official said Monday during the Albert Lea City Council work session.

Building Official and Zoning Administrator Wayne Sorensen said the Jacobson Apartments building, which is between the former Freeborn National Bank building on the north and Stadheim Jewelers on the south, has cracks developing on mortar joints and terra cotta blocks that are cracking. A few blocks have even fallen off the structure, leading to the decision to put scaffolding up underneath at the base of the building as a safety precaution.

“What we’ve got with the Jacobson building is pretty severe,” Sorensen said.

He said in the 2000s, the city spent a large amount of money on exterior renovation of the bank building, repairing parts of the facade and parts of the roof. He said to his knowledge, renovations were not made on the adjoining Jacobson building at that time. The building is presently occupied on the lower level by The Interchange Wine & Coffee Bistro.

The Jacobson’s first two floors were constructed in 1888, and the two upper floors were added in 1923. The building shares a staircase and an elevator with the Freeborn National Bank building nextdoor, which is owned in part by Mortarr.

Sorensen said the terra cotta facade is made up of blocks that are glazed and finished and that are baked similar to pottery. Each block has a piece of metal baked in, and each is tied into the building structure with a wire hook. He said over the years if the building joints are not maintained, cracks develop on the mortar joints as the building freezes and thaws.

To get the building fixed would include taking the damaged blocks off the building and repairing or replacing them. Blocks would need to be sent off to California or New York where artists would build replacements. The blocks would take several months to dry and would then be glazed to match the existing building.

He described the repairs as “very involved” and “very expensive” and said he plans to seek bids for the project, hoping that after competitive bidding the costs for repairs will come in under $300,000.

The council briefly discussed whether there was money in the budget to cover the repairs and whether other projects in the city’s capital improvement plan could be moved to a different year to cover the cost.

Sorensen said every year the building endures another winter, it takes on more damage, which ultimately will increase the cost further.

Several of the councilors said they did not think the city should delay the project.

Finance Director Kristi Brutlag said staff and the council would have to look at other projects scheduled to take place and see if any could be moved to a different time.

Look to the Tribune online for more from Monday’s work session and council meeting.