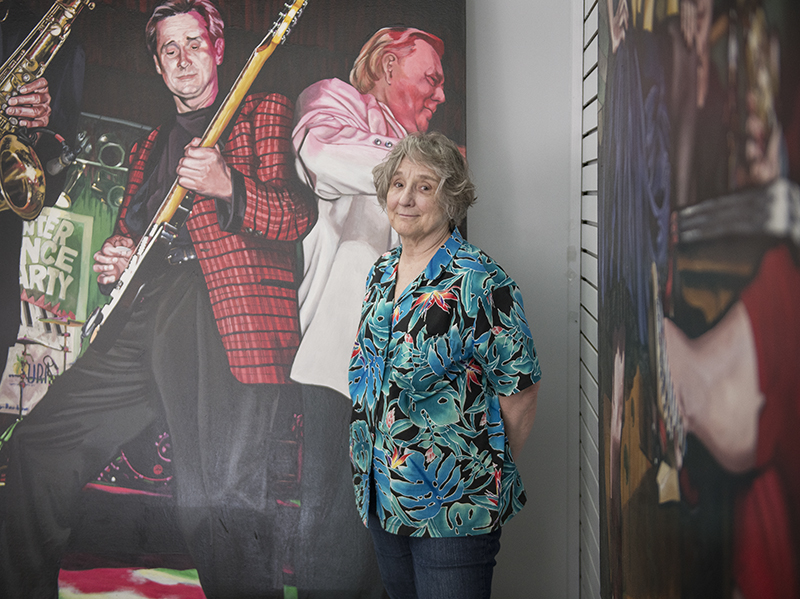 Jaclyn Garlock will have paintings depicting Surf Ballroom in Clear Lake on display in The Albert Lea Art Center's first show since the COVID-19 pandemic shut down the gallery earlier this year. - Colleen Harrison/Albert Lea Tribune

Jaclyn Garlock will display her larger-than-life acrylic paintings — one is 6 1/2 feet by 11 feet — depicting scenes in and around Clear Lake’s historic rock ’n’ roll landmark as The Albert Lea Art Center’s first show since the COVID-19 pandemic forced the center to shut down earlier this year.

Garlock has been painting with acrylics since about 2000, and said her first acrylic show was at the former Art Center in 2001. Prior to that she worked in serigraphy — or silkscreen printing — for many years, before she had to give it up after the chemicals started giving her bad headaches. While she wishes she could have delved into oil painting — a medium that also involves harsh chemicals — and misses creating serigraphs, she has created detailed work with vivid color palettes through acrylics.

She has painted a number of different series, including “Working Girls,” which Garlock described as paintings showing “extraordinary women doing ordinary things.” She tends to create her paintings from photographs she has either taken or staged.

Now Garlock, a Clear Lake resident, has turned her focus to Surf Ballroom, which has seen the likes of everyone from The Everly Brothers, Roy Orbison and Little Richard to Alice Cooper, Santana, BB King and Lynyrd Skynyrd, among many others. The venue also hosted Buddy Holly, Ritchie Valens and The Big Bopper in February 1959 in what ended up being the last time the three musicians would perform; they died in a plane crash following the performance. 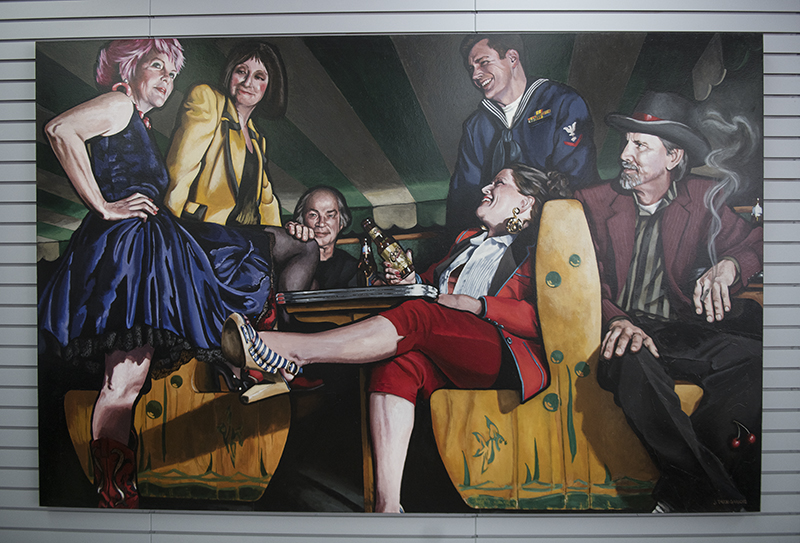 Garlock said her acrylic paintings are painted from photos she has either taken or staged in and around Surf Ballroom. – Colleen Harrison/Albert Lea Tribune

Garlock knows the current Surf Ballroom owners, who she said purchased the venue in 1994 — “They really brought it back to life,” she said. Garlock helped work on the pineapple stenciling in the lobby of the building. Turning the focus of this series to the ballroom just made sense.

“You paint what you know, paint where you live,” she said. “What a fun thing to paint.”

While an artist through and through, Garlock said it’s the finished work that motivates her.

“I’ve never been much of a process person,” she said. “I like the result.”

Originally Garlock was scheduled to display her Surf Ballroom series in line with Albert Lea’s Eddie Cochran Days in June, but the coronavirus pandemic put both events on hold.

Art Center Artistic Director Beth Tostenson said she kept in touch with Garlock, wanting to make sure the series would still come to Albert Lea, and said it’s a great series to showcase as the Art Center comes back.

“We’re just really excited to have (Garlock’s) show,” she continued. “Her art is just wonderful.”

The Art Center’s hours will be from 10 a.m. to 4 p.m. Tuesdays and Fridays for the time being, Tostenson said. Those wishing to make an appointment to visit the Art Center outside of those hours can contact her at 507-481-4025. Masks and social distancing will be required inside the building, which will have a 30-person maximum. There will be no gallery opening reception.

The Albert Lea Art Center, 101 S. Broadway Ave. in downtown Albert Lea, has started a “Mask up, Albert Lea” initiative, asking people to send in their creative masked selfies. The self portraits will be printed and displayed in the Art Center’s front window.

Tostenson also said the Art Center received a grant for a selfie wall. A pair of angel wings will be on display inside the building for guests to use to take pictures.