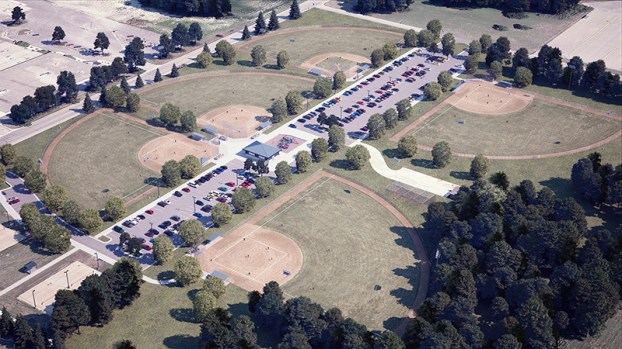 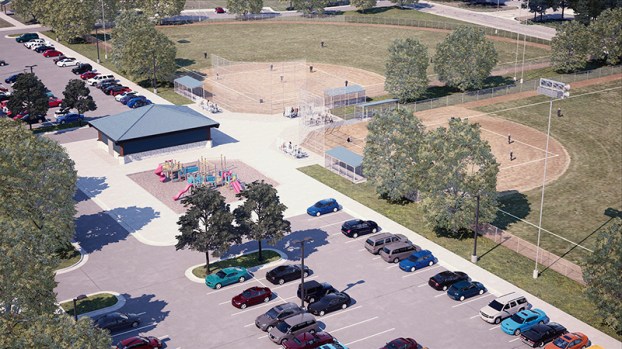 A rendering from firm WSB of a new sports complex at Snyder Fields shows a new parking area, concessions building playground area near the fields. Provided 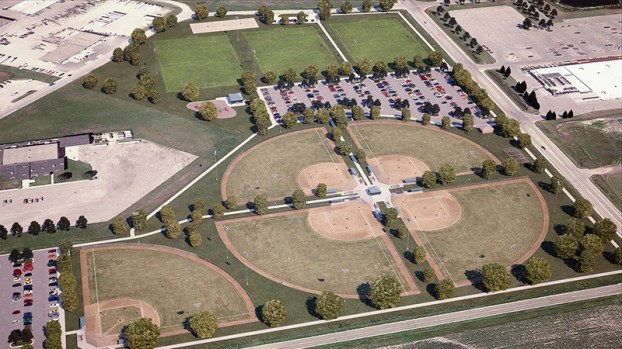 A rendering from firm WSB shows possibilities for a new sporting complex off of Blake Avenue and Southeast Marshall Street across from Home Depot. Provided 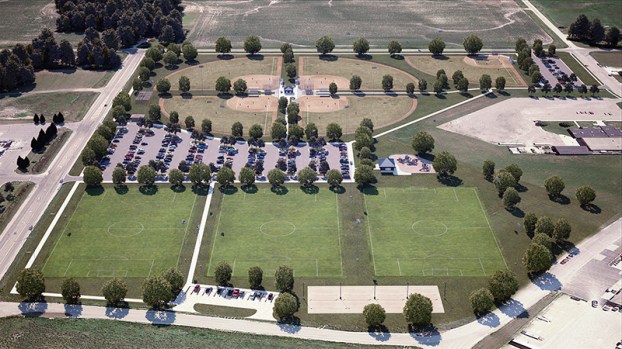 A rendering from firm WSB shows amenities that could be included in a new sporting complex if it were built off of Blake Avenue and Southeast Marshall Street. Provided 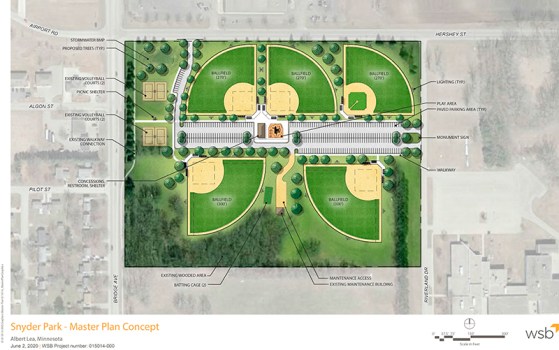 Master plan concept from firm WSB for revelopment of Snyder Park without the addition of new rectangular fields. Provided 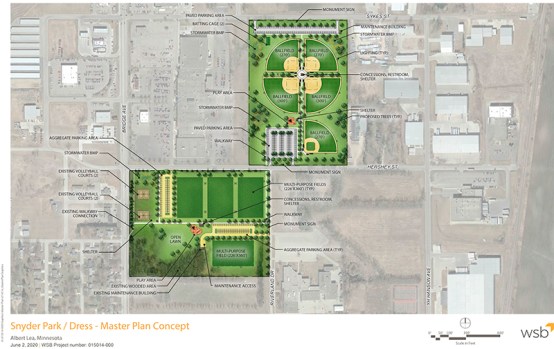 The master plan concept from firm WSB for the sports complex, including property at the existing Snyder Fields and property north of Hershey Street. Provided 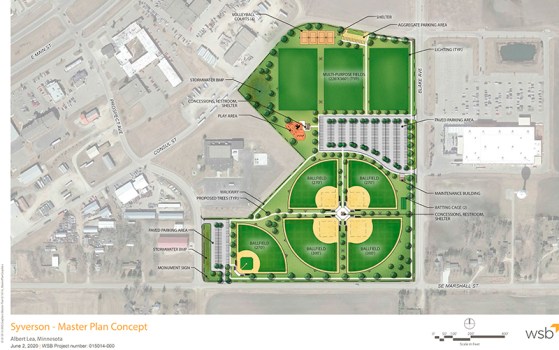 Master plan concept from firm WSB for a sporting complex on property at Blake Avenue and Southeast Marshall Street. Provided

A study presented to the Albert Lea City Council on Monday estimated a new sporting complex with fields for baseball, softball, soccer and other sports to cost between $10 million and $12 million.

Bob Slipka, senior landscape architect with firm WSB, said he was asked to evaluate alternatives available to the city for renovations of the J.M. Snyder Fields or development of a new recreational facility. The city presently leases Snyder Fields, which were built in the late 1970s, from Riverland Community College.

Slipka said to renovate the existing site with the current amenities would cost between $6.15 million and $7 million, including everything from new fields, fencing, lighting, a concessions building, a restroom building, a play area, parking lot, batting cages, updated sand volleyball areas and other general items.

In addition to renovating the current site, Slipka said the firm looked at other possible sites around the community for an expanded sporting complex. It had meetings with representatives from several recreational leagues in the community, including youth softball, youth baseball, Albert Lea Community Baseball tee ball and coach pitch, youth soccer, rugby and lacrosse groups, the high school and the city’s recreation department. The stakeholders expressed that current participation in these activities was stable but growth was anticipated.

Slipka said the firm toured nine potential sites for the complex and inventoried the characteristics of those sites.

The sites were narrowed down to five, including property on the Blazing Star Landing; property off of Lake Chapeau near City Arena; property north of Edgewater Park bordered by Itasca Road and 736th Avenue; property across from Home Depot bordered by Blake Avenue and Southeast Marshall Street, and a combination of property at the existing Snyder Fields and additional property east of Northbridge Mall.

Ultimately, the top two sites were the site near Home Depot and the site with the combination of the existing Snyder Fields and additional property east of Northbridge Mall.

Slipka said the city had initially discussed starting with $1.5 million for the project. Five new ballfields are projected to cost between $3 million and $3.5 million, not including scoreboards, dugout shade structures, supporting amenities, a concessions building, permanent restrooms, a play area or other park amenities. The projected cost also does not include cost of land acquisition.

For the entire project to be completed with all of the priorities, the estimated development cost is $10.08 million to $11.6 million at the combination site at Snyder Fields and the additional property east of the mall.

Second Ward Councilor Larry Baker asked if talk from Riverland Community College about building a new apartment complex would play into plans east of the mall, and Slipka said the firm created alternative design plans if this were the case.

To have the complex at the site near Home Depot, the development cost would be between $10.47 million and $12.04 million. While cost savings could come from the ability to have one large parking lot instead of a few smaller ones, costs were slightly more because contractors would need to bring in additional topsoil at that site.

Slipka said the city could look at numerous funding options for the project, including asking Freeborn County for funding, along with private funding corporate grants and donations, bonding or tax levies.