Reports call for significant reduction in nutrient pollution in watershed 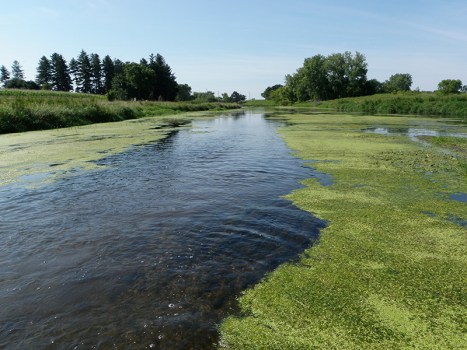 The Shell Rock River, at the bottom of the chain of lakes and streams in the Shell Rock River Watershed District, suffers the most from phosphorous and other nutrients, the MPCA report states. For the river to better support fish and recreation, reductions are needed In both regulated sources such as wastewater discharge and non-regulated sources such as cropland runoff. - Provided 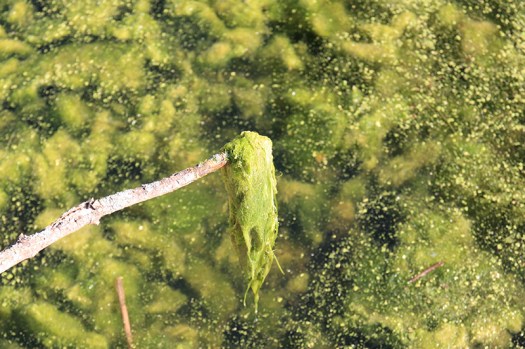 Pickerel Lake, the first in the chain of lakes in the Shell Rock River Watershed, is experiencing a severe algae outbreak. Algae is common in the lakes in the watershed, and hurts fish, other aquatic life and recreation. Two recent reports call for significant reductions in phosphorus that grows algae, along with reductions in other pollutants. - Provided 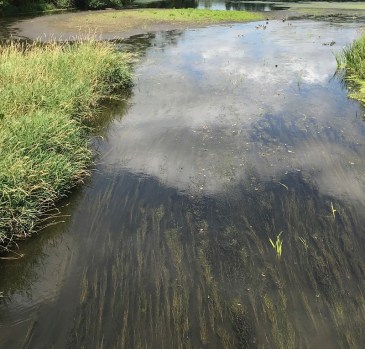 Sediment from Schoff Creek is filling in Dane Bay of Fountain Lake. While the bay is being dredged, it will continue to fill in with sediment unless more upstream practices and controls are put in place to reduce runoff and erosion, the Minnesota Pollution Control Agency states. This creek also has high levels of nutrients and bacteria at times. - Provided 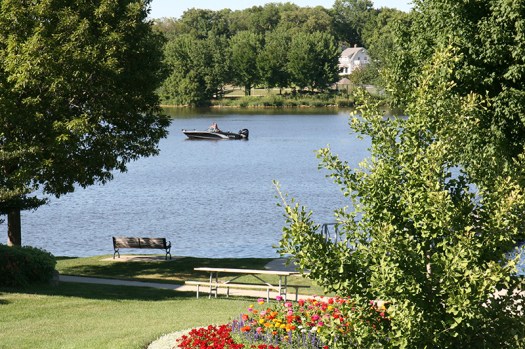 Lakes and streams in the Shell Rock River Watershed, including Fountain Lake, are popular for fishing. - Provided 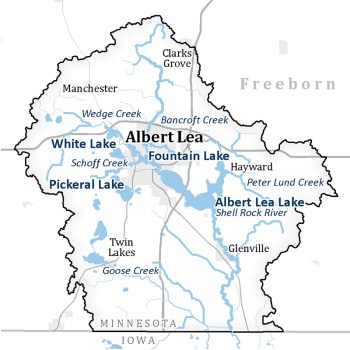 Two reports by the Minnesota Pollution Control Agency and its partners are calling for significant decreases in nutrient pollution in lakes and streams in the Shell Rock River Watershed District to better support fish and recreation.

The reports call for strategies including expanding cropland practices, reduction in phosphorus from the city of Albert Lea’s wastewater treatment plant, increased wetland restoration and continued lake management strategies, among other efforts.

“A great deal of good work has already been done in this watershed, but the job is not finished,” said Wayne Cords, regional watershed manager for the MPCA. “We need significant reductions in pollutants for the lakes and streams to better support fish, aquatic insects and recreation. The reductions need to come from all sources — urban, business, rural and agricultural.”

The MPCA, which is responsible for implementing the federal Clean Water Act in Minnesota, studies about eight watersheds per year across the state, Cords said. The agency worked with the city, county, Freeborn County Soil and Water Conservation District and the Department of Natural Resources during the study.

The report called for nutrient levels to decrease by 46 to 71% in those lakes.

The state agency stated parts of Bancroft and Schoff creeks also have bacteria levels too high at times to meet standards and that bacteria can make streams unsafe for contact recreation such as wading.

Part of Schoff Creek also has nutrient and sediment levels too high to meet standards. Nutrients cause algae, and sediment makes the water too cloudy for fish and other aquatic species.

The river suffers at times from high nutrient, bacteria, sediment and pH levels, all harmful to fish and other aquatic species, and the river’s dissolved oxygen levels are too low at times to sustain fish. The agency stated pollution reduction will be necessary from both regulated sources, like the Albert Lea wastewater treatment plant, and non-regulated sources, such as fertilizer runoff and erosion.

“In essence, we have an algae factory in Albert Lea Lake,” Cords said. “Fertilizer runoff and phosphorus in the bottom sediment lead to high algae levels that flow into the Shell Rock River. Then downstream, the Albert Lea wastewater treatment facility is like a super-feeder of phosphorus into the river, producing even more algae. We are looking for leadership from all sectors to work together to improve and preserve natural resources for people here and downstream.”

The agency states to achieve the goals, phosphorus must decrease by 75%, which may require the city of Albert Lea to upgrade its 40-year-old wastewater treatment facility. The facility discharged 32 tons of phosphorus directly into the Shell Rock River in 2019 — the third highest level discharged by Minnesota facilities, according to the MPCA. Cords said one pound of phosphorus can result in 500 pounds of algae growth.

Though state officials recognize the significant cost in upgrading the treatment facility, they said there are potential funding sources from the state that could help with the process.

Cords said when the phosphorus standard is reached, the river will be less green due to reduction in algae, and there will be a more diverse fish population.

He said phosphorus also needs to be reduced by 65% in non-regulated sources, such as with agricultural runoff and tile drainage.

Though 700 homeowners have upgraded or replaced septic systems, there are still other failing septic systems that are contributing to the problem, as well. Other improvements that can be made include improved animal manure management, ensuring animal feedlot compliance and increased water storage through wetland restorations, controlled drainage structures, drainage ditch system management and soil health practices. There should also be continued lake management strategies for shallow lakes such as rough fish control, native aquatic plant restorations and water level drawdowns.

He said the Fountain Lake dredging will only be a temporary solution for the lake unless the influx of phosphorus and sediment that lead to the lake can be reduced.

Cords noted the work of the city, the Watershed District and other partners thus far.

“We’ve done good work, we just need to do more across more acres,” he said.

Albert Lea Public Works Director Steven Jahnke said the city has been working with the MPCA regarding its modeling and phosphorus loading guidelines but still does not agree with where the state agency is at on these issues.

He said city staff are not comfortable with the MPCA’s model. If the TMDL report is approved, it will put phosphorus limits on all of the lakes. While staff for the most part are in support of these, they don’t agree with where the state is at regarding the Shell Rock River.

“There’s nobody in the city of Albert Lea or the council or staff that doesn’t want clean water,” Jahnke said. “We just want to make sure the limits are correct if we’re spending that large of a number.”

He said a consultant has estimated a new wastewater treatment plant would cost between $40 million and $50 million.

If the limits are put in place, the city would have to go to the MPCA and the state Legislature and ask for help with the cost.

Shell Rock River Watershed District Administrator Andy Henschel said he was frustrated with how long it took to complete the report, noting it has been ongoing for the past 10 years. He said he does not think the MPCA’s model best showed all the work the watershed district has done in recent years and wished it could have used newer data.

Cords said the report used data from the last 10 years.

Henschel said moving forward, the watershed district will continue its dredging efforts and other educational efforts and projects, as well as working with the rural community and the county’s soil and water conservation district.

The two reports are open for public comment through Sept. 25. The MPCA will hold a public information meeting, via Webex, at 7 p.m. Tuesday. For the presentation, details about the reports and public meeting, visit https://www.pca.state.mn.us/water/watersheds/shell-rock-river.

Mail or email written comments to Emily Zanon, MPCA, 18 Wood Lake Drive SE, Rochester, MN 55904 by 4:30 p.m. Sept. 24. Call her at 507-206-2613 for more information. Written comments must include a statement of the respondent’s interest in the report, and the action requested of the MPCA, including specific references to sections of the draft documents that should be changed, and the reasons for making those changes.

The MPCA may revise the reports based on comments received before sending the TMDL to the U.S. Environmental Protection Agency for approval.