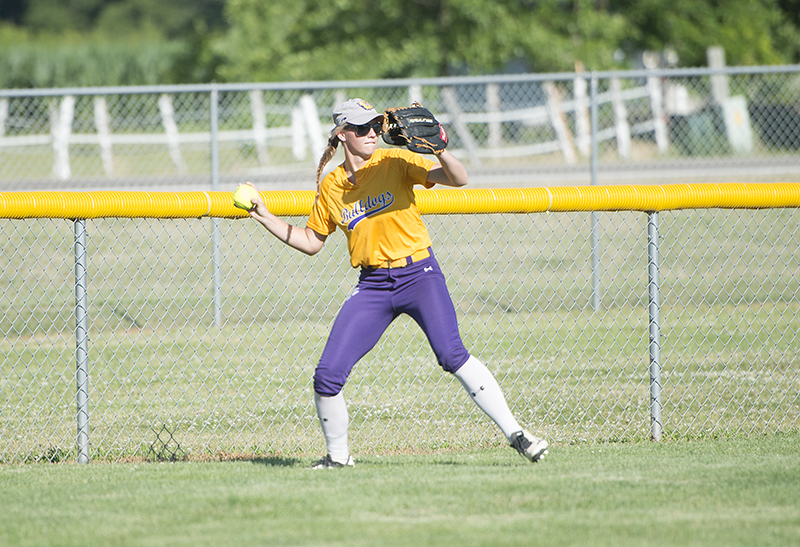 The Bulldogs fell in a hole early and were never able to recover, eventually falling to the Saints 18-1.

The Saints opened the game with a double in the top of the first and never looked back. A stretch of four consecutive walks in the inning pushed three runs across the plate before a popout and strikeout ended the top half of the inning.

Singles by freshman Natalie Brandenburg and senior Jessa Gasteiger in the bottom of the inning shot some life into the Bulldogs, however, back-to-back ground balls ended the inning before the base runners could score.

The Saints added another run in the second inning, but the Bulldogs left another runner stranded in the bottom half. 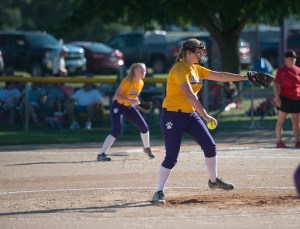 Eighth grader Scout Kohagen winds up with a pitch in the first inning against St. Ansgar Tuesday night at home. The Bulldogs lost the game 18-1. – Tyler Julson/Albert Lea Tribune

Lake Mills held St. Ansgar scoreless in the third and scored a run of their own when Brandenburg hit a sacrifice grounder to bring in sophomore Brooke Bergo. Another run was threatening when Gasteiger reached third base, however, she was thrown out at home plate trying to steal.

The Saints tacked on three more runs in the fourth inning using four singles and a walk. The Bulldogs offense, however, continued to struggle, hitting into three straight fly balls.

St. Ansgar continued to build on its lead by scoring two in the fifth inning, but pulled away in the sixth by extending the lead to 17 runs.

The Bulldogs needed at least eight runs to extend the game to the seventh inning, but a lone single by senior Olivia Moen was not enough to get it done.

The Bulldogs fall to 2-9 on the season and will play again Thursday night on the road against Estherville Lincoln Central.