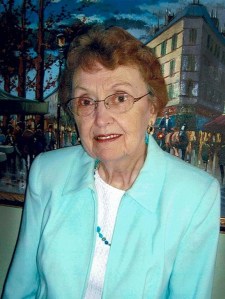 Shirley was born on February 20, 1928 in Albert Lea, Minnesota to Chris and Lillian (Nelson) Paulson. Several years later the family moved to Hastings, Nebraska where Shirley attended graduated from Hastings High School. She then returned to Minnesota and began working at Security State Bank in Albert Lea.

Shirley was united in marriage to Roger Raines on February 11, 1950 and made their home in Alden, Minnesota. To this marriage five children were born. Roger passed away in 1979. Shirley worked various jobs over the years including, Land O’ Lakes, Café Don’l and St. Johns Nursing Home. Shirley married Lloyd Wright in 2011 and moved to Hastings Nebraska where she inherited a second loving family until Lloyds death later that year.

Shirley will be remembered as a kind, loving and gentle teacher to her children and grandchildren, with a sweet humble spirit and a willingness to care for people in need. She was devoted to her faith as a member of both Alden United Methodist Church and Calvary Baptist Church in Albert Lea where she served as a volunteer for many church activities. She delivered Meals on Wheels, sewed quilts for missions and offered rides to the doctor for anyone in need. Shirley loved gardening, nature and spending time with her friends and family.

Shirley was preceded in death by her parents, her husbands, her sister, Dorothy Paulson, her brother Donald Paulson, her granddaughter, Brittany Kuster and her stepson, Ronald Wright.