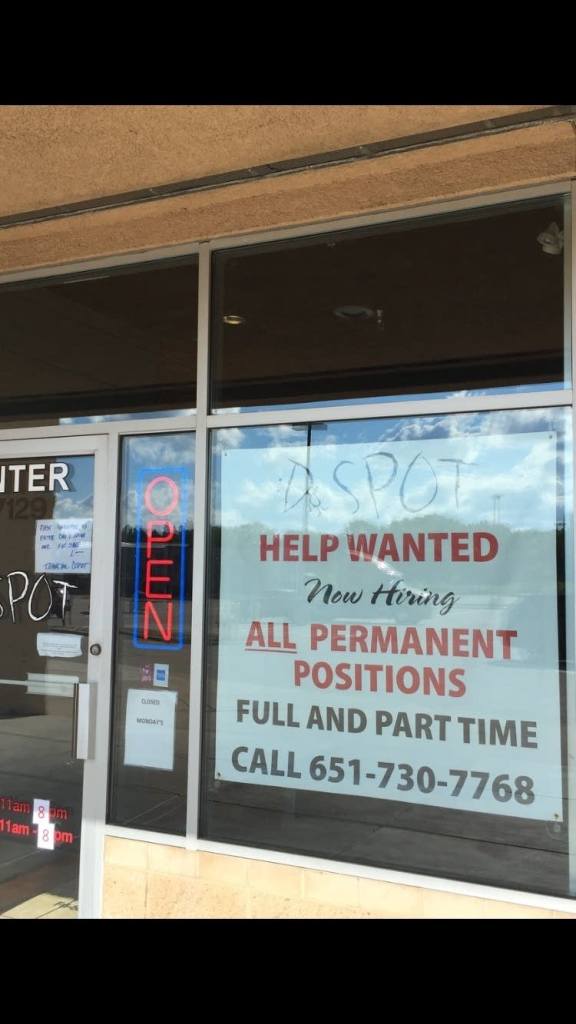 A large help wanted sign hangs near the entrance to D-Spot, a restaurant in Oakdale, on Thursday. Mark Zdechlik/MPR News

He runs two small businesses in northern Minnesota and can’t fill open jobs, even though unemployment is at near record highs.

Karnes makes fishing tackle and stamps metal for a variety of products.

Before the pandemic, he had 10 employees. Six people work for him now, and he can’t keep up.

“We’re not making money. We’re not making product, and we’re getting further behind as we go,” he said. “So, it’s on myself and my wife and my son to put in extra time even just to try and get product out.”

Karnes is convinced the extra $600 per week that the federal government added to unemployment benefits — not the COVID-19 pandemic — is to blame for the shortage of job applicants.

“The problem is people are being rewarded just to stay home and not to work. That’s the biggest issue,” he said.

It’s a complaint many businesses are expressing. Plenty of people who are working low-wage jobs are also dumbfounded that others are making more money than they are collecting unemployment.

Chad Dohlen, president of Midwest Staffing Group, which links employers with employees for light industrial and office work, said his agency has more jobs than it can fill.

“Literally, when we call candidates about that, they’ll sometimes as much as laugh at us and hang up the phone and tell us they can make more money on unemployment,” Dohlen said.

Even though the extra $600 per week benefit is about to end, Dohlen said he continues to see a lack of interest in returning to work.

“We’re tried to set that tone, that sense of urgency that this is going away at the end of July and kind of hoping that maybe we’d get some more people who want to go back to work, but it’s just not happening,” he said. “We’ve enhanced our referral bonus, we’re giving sign on bonuses, we’re doing everything we can possibly think of to try to get people back to work.”

Dohlen thinks once the unemployment bonus is gone, many unemployed people will start looking for jobs.

Economist Louis Johnston, who teaches at St. John’s University and the College of St. Benedict, said the data is mixed about people choosing enhanced unemployment benefits over work.

“I think it varies by the industry,” he said.

More specifically, it varies by wages. With that extra $600 a week, workers on the lower end of the wage scale — roughly under $25 an hour — are making more money staying at home than they were making at their jobs. But research from the University of Wisconsin-Madison suggests only about 1 in 4 Minnesotans is in that situation.

“There will be more candidates than there will be jobs, but then that will start to even out over the course of the next six to eight months based, again, on what our clients are telling us,” Chalupsky said, adding this advice to people who plan to return to work. “Get started now, because in August there is going to be a flood of candidates out there and if they really do need to get back to work, it’s going to be a first-come, first-served situation, at least for the next few months. So I would suggest they start doing it today and not wait until the end of the month of the first few weeks in August.”

Johnston agrees jobs could be increasingly difficult to come by, but not because scores of people will be driven back to work by decreasing unemployment benefits.

Johnston said he worries the spread of the pandemic will shrink the economy just as it appeared that it was beginning to turn around.

“For example, in southern California they’ve shut down all the restaurants and bars again,” Johnston said. “How’s that going to affect companies like Hormel in Austin which has a large food service component? That might end hurting the jobs that are available there or at some of the other packaged food companies.”