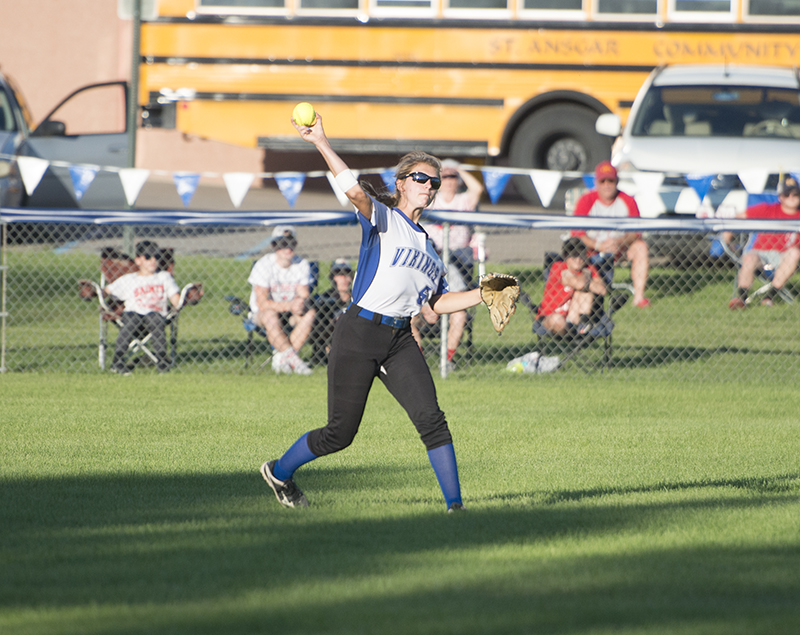 Northwood-Kensett senior Peyton Pangburn throws the ball in from center field Wednesday night in the second round of the regional tournament against St. Ansgar. The Vikings lost the game 13-0, ending their season. - Tyler Julson/Albert Lea Tribune

After a thrilling victory in the first round of the regional tournament Monday night, the Northwood-Kensett softball team hosted St. Ansgar Wednesday for a trip to the region semifinals.

Despite a close game earlier this season, the Saints controlled this game from start to finish. The Vikings’ early turnovers put them in a hole they were unable to climb out of, losing the game 13-0.

St. Ansgar wasted no time getting on the board with two singles, a walk and an error in the first inning. WIth the bases loaded, Northwood-Kensett pitcher, junior Kayla Senne, took the game into her own hands. Senne struck out the next three batters, ending the inning with minimal damage.

Senior Jaela Parks reached base on a one-out error in the bottom of the first inning, but failed to come around for the score.

The Vikings’ defense held strong in the second inning, allowing only one base runner who failed to make it further than first base.

After a one-two-three inning at the plate, the Vikings went back into the field and gave up three runs after two passed balls and a fielding error.

Sophomore Carly Hengesteg hit a single in the bottom of the third inning, but was left stranded at first when a pop fly in the next at bat ended the inning.

Northwood-Kensett cleaned up its game in the fourth inning, committing no errors. However, St. Ansgar’s batting came up big with a sacrifice bunt, two singles and a triple that scored another three runs, making the lead 7-0.

Freshman Teagan Johnson picked up the second hit for the Vikings in the bottom of the fourth inning, but like her teammates before her, Johnson was left stranded after a pop fly ended the inning.

Again, the Vikings’ defense played well in the fifth inning, sitting down the first three at bats. However, they failed to capitalize in the bottom half with senior Kennedy Eskildsen picking up the only hit of the inning.

The Saints blew the game wide open in the sixth inning, scoring six runs with a three-run homerun, a single, a triple and a dropped third strike.

The Vikings needed at least four runs to extend the game into the seventh inning, but Parks was the only player to reach base after a lead-off single.

Senne pitched all six innings, allowing 13 runs on 11 hits and three walks. She struck out 14 batters.

The Vikings ended their season with a 5-8 record and will lose four seniors from the team, including Eskildsen, Parks, Alexis Halbach and Peyton Pangburn.