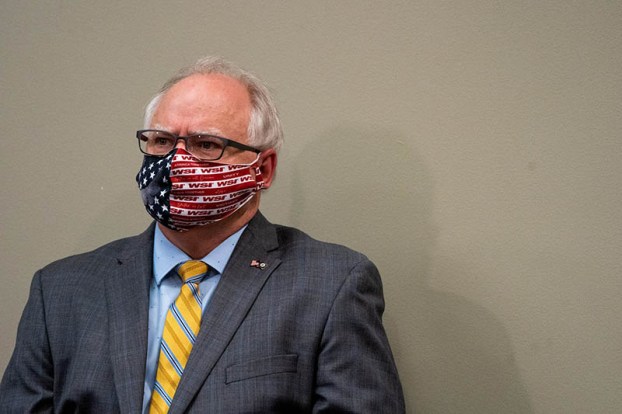 Gov. Tim Walz sits with a mask on at a press conference at the Department of Public Safety in St. Paul on May 23. - Evan Frost/MPR News

ST. PAUL — Gov. Tim Walz is requiring Minnesotans to wear face masks to try to slow the spread of the coronavirus.

Walz said in a statement “there’s no better way to demonstrate our Minnesotan values than by wearing a mask.” So far, 30 states, Washington, D.C., and Puerto Rico have issued similar mandates.

People with a medical condition, mental health condition or disability that makes it unreasonable to maintain a face covering are exempt, as are children 5 and under. Violations are a petty misdemeanor carrying a fine of up to $100.

The Minnesota Hospital Association last week called on the governor to order masks statewide, but Republican legislative leaders have said it would be a mistake.

Senate Majority Leader Paul Gazelka criticized the idea of a mandate ahead of Walz’s announcement, calling it a “heavy-handed, broad approach that won’t work well for every situation.” In a statement, he noted that many counties have been only lightly affected by the coronavirus.

An Immigration and Customs Enforcement detainee transferred to the Freeborn County jail last week was found to have tested positive... read more