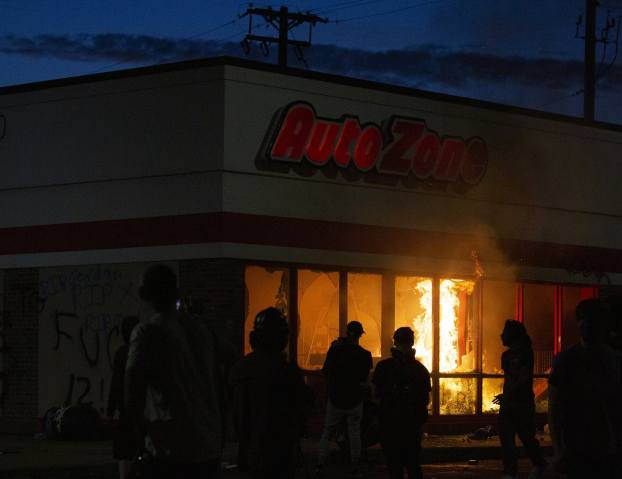 A fire burns in an AutoZone store after it was looted during a May 27 protest against the Memorial Day killing of George Floyd in Minneapolis. Christine T. Nguyen/MPR News

An alleged white supremacist instigated an initial round of destruction in Minneapolis following George Floyd’s killing, breaking windows at an auto parts store and egging on others to loot the store before it was burned down, according to a search warrant for the man’s phone records.

The warrant refers to the person as “Umbrella Man,” a 32-year-old dressed in all black, carrying a black umbrella and a sledge hammer he used to break storefront windows. His most recent address is at a home in the Anoka County city of Ramsey. MPR News is not naming the man because he has not yet been charged with any crime.

Community members have suspected for weeks that outside extremists, including white supremacists, were fomenting violence and trying to stoke racial tensions in the wake of Floyd’s killing by Minneapolis police officers. Several Twin Cities residents reported seeing white supremacist and other far-right imagery on vehicles that came into their neighborhoods during the protests.

“Umbrella Man” appears to be one of those white supremacists. In the warrant, police say he was trying to “sow discord and racial unrest” when he arrived on the scene of a peaceful protest. Video from the scene showed other protesters approaching the man, apparently trying to dissuade him from destroying property.

The man continued anyway, spray-painting “free [expletive] for everyone zone” on an AutoZone store at Lake Street and 27th Avenue, and breaking its windows, according to the warrant.

“The actions of this person created an atmosphere of hostility and tension,” the warrant said, adding that investigators believe the suspect’s “sole aim was to incite violence.”

Police say the man was identified in an emailed tip and that he’s a member of the Hell’s Angels and associate of the prison gang Aryan Cowboys, a white supremacist organization with presence in Minnesota and Kentucky. Even though “Umbrella Man” was wearing a gas mask, Minneapolis police arson investigator Erika Christensen said, his height lines up with the video and “there is a striking resemblance in the eye, nose bridge and brow area.”

Christensen does not allege that the man started the fire in Minneapolis but says his alleged actions created an atmosphere of hostility and tension that set off a string of fires and looting.

This wasn’t the only time the “Umbrella Man” was allegedly involved in a hateful incident this summer.

According to the warrant, on June 27 the man was on the scene when a group of people wearing Aryan Cowboy leather vests harassed a Muslim woman in Stillwater.

What seems to be his Facebook profile contains white supremacist imagery including pictures of people with swastika tattoos and giving Hitler salutes.

He does not have a felony record in Minnesota, but last November he pleaded guilty to making terroristic threats against his ex-girlfriend, with whom he shares a 16-month-old son.

According to the criminal complaint in that case, the man showed up at the woman’s home in Jordan, Minn., threw her to the ground, choked her and threatened to kill her. A Scott County judge sentenced him to 60 days in jail and two years probation and ordered him to stay away from the woman.

Last September, he pleaded guilty to another gross misdemeanor for violating a no-contact order. Prosecutors say he sent the woman a Snapchat friend request.

Also last fall, the man petitioned the court for joint custody of his son. A hearing on the matter is scheduled for November.

As of Tuesday afternoon, his name did not appear on jail rosters in the Twin Cities metro area. Minneapolis police spokesperson John Elder said the investigation remains active and he’s unable to comment.

The Minnesota Department of Agriculture has been receiving reports of residents receiving unsolicited packages of seeds appearing to come from... read more