An Albert Lea woman is facing arson charges after allegedly starting her house on fire two times in April. 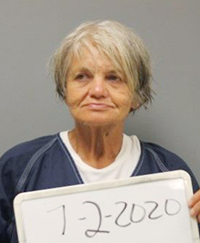 Diane Jean Kadrmas faces two counts of first-degree arson of a dwelling, one for each of the alleged attempts.

Court documents state the first fire took place April 21. When officers arrived at 720 Minnesota Ave., they reportedly found flames on the roof of the house on the southeast corner.

Firefighters extinguished the blaze, and determined the fire was believed to have been intentionally set on the second floor of the house.

Court records state police found Kadrmas outside a motel and interviewed her, where she allegedly admitted to starting the fire, with an intent of burning herself.

She reportedly told police she put a metal boiler container in the upstairs bedroom on the floor with paper and clothes and started a fire with matches. She said she started the fire because there were a lot of thefts in the area. She had heard people talking about stealing the clothes she had bought for some friends and decided that if her friends could not have the clothing, no one else could either. She also mentioned being under surveillance.

A boiler container was later found in an upstairs bedroom with clothes, and there was fire damage through the ceiling and on the floor. A copper pot was found in the debris on the first floor in the area where the hole was in the ceiling, and the pot had fire debris in it.

Court documents noted a firefighter fell through the second floor of the residence while fighting the fire.

The second fire at the house was reported April 27. Officers were told that a female riding a bike in the alley may be a possible suspect, but they could not locate the person.

The fire in this instance was near the basement steps on the northeast corner of the house. The outside door that led to the stairway had been locked and a mattress blocked the door and was burning.

Damage from the fire was contained to the basement and the stairs of the residence.

In another interview, Kadrmas said she had started the fire by throwing sparks on a mattress in the basement. She told police she wanted to burn the house down so it would not be used by the Hells Angels to have a party and kill people and that she started the fire and then left with her bike, court documents state.

Kadrmas is being held in the Freeborn County jail and is next slated to appear in court for a review hearing Sept. 14. She will undergo a psychological exam by a court-appointed examiner to determine her competency moving forward.

See what happened over the weekend in the public safety report here.