One person died and another was seriously injured Thursday night after a car crashed into a tree on 795th Avenue near the Glenville beach.

The Freeborn County Sheriff’s Office stated it was called to a one-vehicle crash at 7:31 p.m. Thursday after receiving an initial report that two people had fallen out of a car.

When deputies arrived, they found a one-vehicle crash with multiple victims.

The Sheriff’s Office stated a 2002 Ford Taurus, driven by Dominik Nikko Boots-Ringoen, 18, of Albert Lea, was reportedly traveling south on 795th Avenue near the beach when the car left the roadway and hit a tree.

Two occupants were ejected from the vehicle.

The Sheriff’s Office stated James Joseph Amarosa III, 17, of Albert Lea was pronounced dead at the scene, and Cameron Michael Cunningham, 15, of Twin Lakes was flown by Mayo One helicopter to St. Marys Hospital with life-threatening injuries. 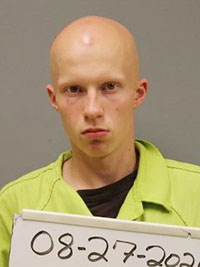 Court documents state Boots-Ringoen initially denied being the driver of the vehicle but later admitted to multiple people at the scene that he had been driving and that the owner was in the passenger seat. He told deputies they had been coming from Albert Lea and were heading southbound when he lost control and struck the tree.

A deputy and Minnesota State Patrol trooper reportedly saw multiple marks made by drifting in the road. Court records stated “drifting” in this context refers to a driving technique in which the driver intentionally oversteers to cuase a loss of traction, causing a vehicle to drift sideways.

Court documents state at least one of the passengers was cited for underage drinking and had a preliminary breath test result of .185.

Other assisting agencies  at the crash site were the Minnesota State Patrol, the Albert Lea Police Department, Glenville Fire Department, Mayo Ambulance and Mayo One helicopter.

Boots-Ringoen was charged with third-degree driving while intoxicated tied to a separate incident Aug. 11.

Posts on social media indicated a candlelight vigil is planned for 8:30 p.m. Friday at the North Broadway parking lot for Amarosa and to pray for Cunningham. People are encouraged to wear face masks.