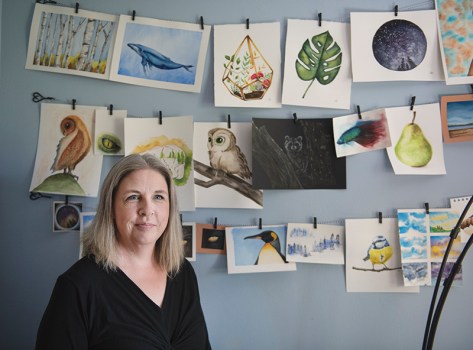 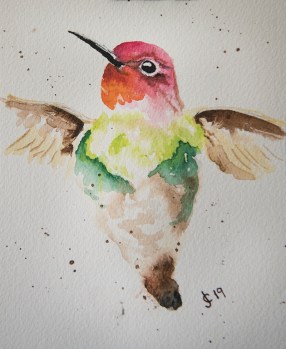 One of Campbell's daughters had this hummingbird painting tattooed on her arm. - Colleen Harrison/Albert Lea Tribune 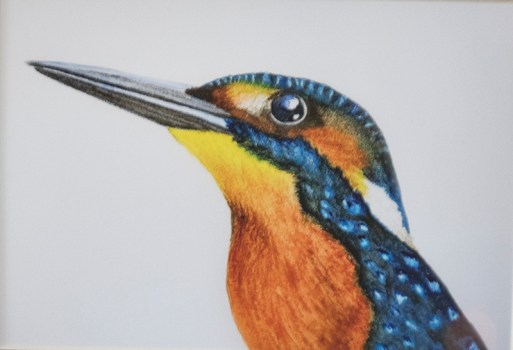 This portrait of a kingfisher was done in watercolors. - Colleen Harrison/Albert Lea Tribune 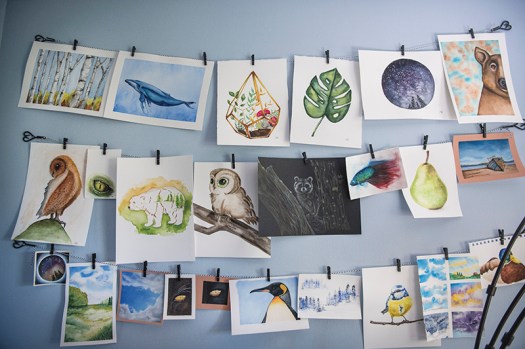 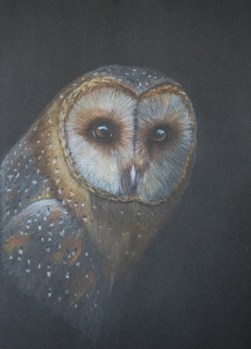 "I have a thing for owls, I think," Campbell said. - Colleen Harrison/Albert Lea Tribune 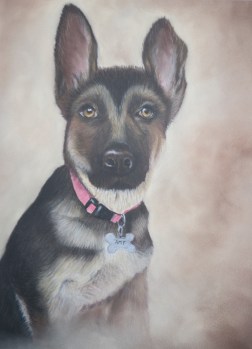 If Campbell had to pick a favorite of the pieces she has done, it would be a pastel portrait of her German shepherd, Amy, as a puppy. - Colleen Harrison/Albert Lea Tribune 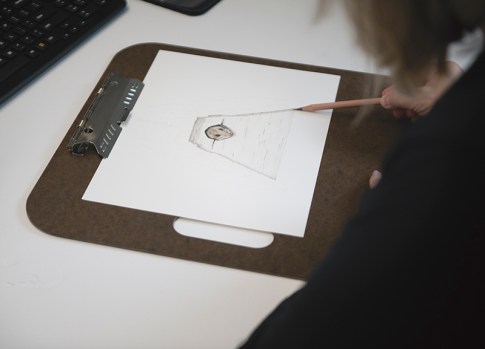 Campbell called her work with colored pencils "colored pencil painting," something she said more and more artists say, due to how many layers go into the pieces. - Colleen Harrison/Albert Lea Tribune 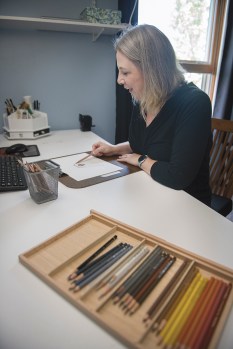 Campbell said the things she paints tend to be from pictures she is drawn to. - Colleen Harrison/Albert Lea Tribune

CLARKS GROVE — About four years ago, Jamie Campbell realized something was missing in her life. While happily married with three children, Campbell said much of her life revolved around work and home.

“I didn’t have anything for me,” she said.

She was 40 at the time, and said it was “probably a midlife crisis.” She initially tried photography, before getting involved with selling different body products, but nothing seemed to click. She went with a friend to a Canvas & Chardonnay painting party in Rochester, and finally found her answer to what was missing.

From there, Campbell started watching YouTube tutorials and finding online painting classes, looking through different books and practicing what she found. She couldn’t get enough.

Over the past four years the Clarks Grove resident has honed her self-taught skills, and now has a spare room-turned studio filled with her different creations. Watercolor, acrylic, pastel and colored pencil works of art line the walls in the room. Some of the pieces are full portraits of animals, or depict plants or other scenes, and some just show the eyes of different animals — eyes that seem to be looking right through you.

“‘I didn’t know you could do that,’” Campbell said multiple people have told her upon seeing her work. “I didn’t know I could do it, either.”

Campbell said she grew up thinking she couldn’t draw, and still doesn’t consider herself much of a drawer. She starts many of her pieces with a basic outline and then layers her paints, pastels or colored pencil — which she calls colored pencil painting.

“When I want to learn something, I’m all in,” she said.

One of Campbell’s favorite pieces she has done is a pastel portrait of her German shepherd, Amy, as a puppy. She made a closeup of coffee beans being scooped that she framed and displays next to her espresso machine. She created a rose colored pencil piece her father bought for her mother, and her first watercolor painting was of a stem of cotton. She has held on to her early tutorial work — a mountain landscape in gauche, a tornado scene in acrylic. A painting she did of a hummingbird is now tattooed on her oldest daughter’s arm. Campbell’s first piece on black paper using colored pencil is of a barn owl, and different owl portraits or sets of owl eyes can be seen throughout her studio.

Campbell said she makes her paintings from photos she either takes or finds, and picks pictures she is drawn to.

She has done a number of pet portraits and other commissions, and while she is open to doing more of them, she doesn’t want to encourage too many commissions. That takes some of the fun out of it, she said, and makes the process more stressful for her. Campbell said she gets some anxiety from figuring out what price tag to put on her work, and from painstakingly wanting to make sure she is creating what her customers want.

Instead, she likes to stick more to selling prints or cards of some of her work on her Etsy shop — JustCreateArtworks — as well as the kinds of paints and other materials she uses. She also has a Facebook page named Jamie Campbell Art. She was set to join The Albert Lea Art Center to display some of her work before the COVID-19 pandemic put that plan on hold.

Campbell encouraged others looking for their own creative outlets not to give up, and for those thinking they’re not artistic to keep trying.

“I really think I stunk in the very beginning,” she said. “You’ve got to keep practicing.”

She said people have to not be too hard on themselves as they learn, something she has to keep reminding herself.

“There will be times something doesn’t turn out. It’s not a big deal,” Campbell said. “It’s just a piece of paper.”

She still has her insecure moments with her artwork, but then she looks back through her earlier works, sees the progress she has made and knows she is OK, Campbell said. And she still gets a rush from people enjoying her work.