Police arrested an Albert Lea man Thursday after a reported drive-by shooting on the 900 block of West Front Street. 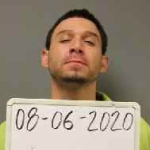 The suspect, Anthony Barela, 29, is being held in the Freeborn County jail on charges of assault with a dangerous weapon, drive-by shooting and possession of a firearm by an ineligible person, according to the Albert Lea Police Department.

Police stated officers were dispatched to the shooting at about 4:18 p.m.

The victim, a 43-year-old Albert Lea resident, stated Barela had stopped his car on Front Street and fired a small caliber weapon at him and then fled in his vehicle. The victim, who was an acquaintance of Barela, was not injured.

Within a short period of time, police found the vehicle at Barela’s residence, and officers set up a perimeter on the residence and called for assistance from the South Central Drug Investigation Unit SWAT team. Prior to the team’s arrival, an Albert Lea police sergeant was able to have the suspect exit the residence, and he was taken into custody without incident.

Police executed a search warrant on the house and vehicle and found a small caliber revolver in the suspect vehicle.

The Freeborn County Sheriff’s Office assisted with the incident.