As Minneapolis plans phased reopening of 38th and Chicago, protesters plan to hold their ground 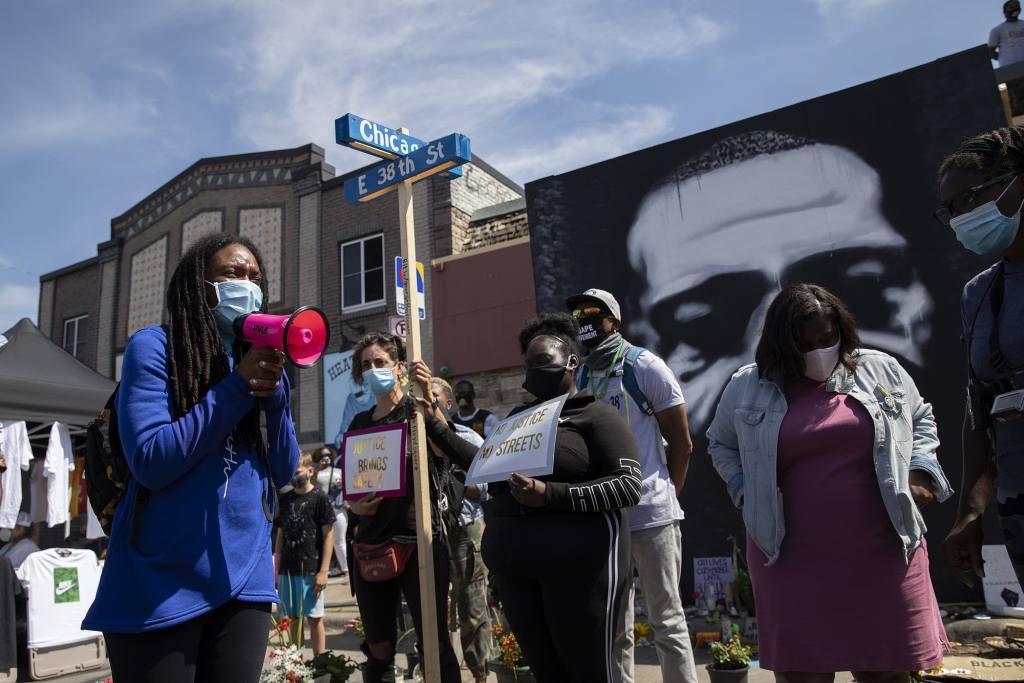 Jeanelle Austin, a lead caretaker of the George Floyd memorial, speaks during a press conference on Aug. 15, as community members demand that city officials wait to reopen the intersection of 38th Street and Chicago Avenue. Christine T. Nguyen/MPR News

The intersection where former Minneapolis police officer Derek Chauvin knelt on George Floyd’s neck has been closed to through-traffic for more than three months, as people gather there to mourn, offer gifts and build community.

Some call it a memorial, others call it a sanctuary. But for the neighbors who show up day in and day out to maintain the space, it’s a form of protest.

When the city announced its plans to reopen a section of the intersection earlier this month, the group responded with a list of 24 demands and a turnout of people prepared to stand their ground.

“The city is looking at the art [at the memorial] as an opportunity for people to come and observe in the context of a museum,” said Jeanelle Austin, who is volunteering as lead caretaker of the site. “It’s not just public grief. It’s disruption of business as usual — because there is an injustice and an inequity that needs to be addressed.”

Austin and other volunteers say they aren’t yet willing to end their protest, even as the city moves ahead with its plan for a phased reopening. It has not set a date for removing the barricades that block cars from the intersection at 38th Street and Chicago Avenue. But in a statement, Mayor Jacob Frey said keeping the intersection closed indefinitely is not feasible. The City Council is expected to seek public comment on the plan at a meeting in September.

That plan would open 38th Street but leave the memorial along Chicago Avenue closed to traffic as the city continues talks with the community. It would preserve a fist sculpture in the intersection by moving it north or building a roundabout to move traffic around it.

“We recognize that racial healing and justice must be at the forefront of our work, and we continue to commit to working with the community,” said Minneapolis Director of Public Works Robin Hutcheson at the City Council’s Policy and Government Oversight Committee meeting last week. “We will continue to discuss specific elements and desires to support racial healing and investment.”

‘Responding where there has been a deficit of response’

The community’s list of demands includes calls for elected officials to recall Hennepin County Attorney Mike Freeman; fire leaders of the Minnesota Bureau of Criminal Apprehension; open investigations and provide transparency in other cases of suspected misconduct by police and prosecutors; and end qualified immunity for police.

Much of this would fall outside of the city’s existing jurisdiction, though it could lobby for changes at the county and state levels.

The list of demands also includes investments in housing, jobs and health care in the communities surrounding the intersection.

In total, the community — made up of volunteers at the memorial, nearby businesses, renters, homeowners, surrounding neighborhood organizations and those experiencing homelessness in the neighborhood, according to Austin — is asking for about $156 million over 10 years.

“This is about the city actually responding to the community where there has been a deficit of response,” she added.

So far, the city has set aside $4.7 million to construct a final vision for the space, among other commitments. It has also named the area a cultural zone, which makes it eligible for certain kinds of economic investment. The city’s planning commission has also voted to rename Chicago Avenue between 37th and 39th streets “George Perry Floyd Jr. Place.”

“We are committed to preserving as much of the memorial to George Floyd as possible and working to honor this physical space in a permanent fashion,” Mayor Frey said in a statement. “The city will continue engaging with community on the decisions still to come and working to ensure secure and safe access for first responders, residents and businesses.”

What about ambulances and snowplows?

At the committee meeting earlier this month, Hutcheson, the city’s public works director, said that kind of access is at front of mind, especially as winter approaches and plows will need to get through.

But Austin, who grew up a couple of blocks from the intersection and caught the bus there to get to Timberwolves games when she was a ball girl, said she isn’t concerned with that.

“Everyone has in their mind that protest is just people marching on the street — this kind of awareness protest,” she said. “But people protest to disrupt business as usual because otherwise people become comfortable with the way life is and they forget about the people who are being marginalized.

“When you’re talking about people outside of this community who use Chicago Avenue, well, now’s a good time to use Park Avenue,” she said. “For the cause of justice, that’s worth it.”

For the time being, Austin and her fellow volunteers will continue to staff the barricades to both protect the intersection and let first responders through as needed.

They’re also waiting for the city to offer an itemized response to their list of demands.